Farrah Abraham tries to extend her 15 minutes of fame beyond Teen Mom. She’s promoting her new album and plans on opening a gentleman’s club. 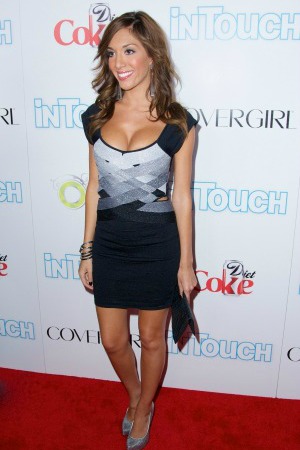 “I just want to bring great prices and better products to the world and be creative all at the same time, and I think that’s what I’m good at business-wise,” she said. “So if I feel like opening up a restaurant, opening up a gentleman’s club, opening up a children’s clothing store and doing songs, books, everything that I feel like doing, I’m going to do it. It suits me well. That’s who I am.”

Farrah Abraham wants you to buy her stuff >>

Going from a gentleman’s club to opening a children’s clothing store is a pretty big stretch, but the 22-year-old seems to know what she wants. What she is unclear about is how that sex tape came to life.

Abraham claimed that Deen was her boyfriend at the time and he leaked the tape out to promote his movie with Lindsay Lohan, The Canyons. That story differs from other versions she and Deen have told the press.

However, the Teen Mom believes she made the right choice by selling it.

She said, “…it was already out, it was already going to be out there for free. So I made a business deal out of it. I’m smart, and I’m happy that I did that.”

The interview took an odd turn, though, when she was asked by the interviewer if she considered herself a feminist. The exchange was downright baffling.

When the reporter corrected her, the TV personality answered, “What does that mean, you’re a lesbian or something?”

Abraham’s next project is promoting her new album My Teenage Dream Ended which has been savaged in the press by some music critics as the worst pop music ever. Yet The Atlantic suggests for its readers to “listen to it as a piece of art, and a compelling story emerges. Seriously.”

While Abraham might not be our country’s next feminist, perhaps she’s the next big pop star.