Michael Douglas is wearing his wedding ring and insists he’s still married to his wife of 13 years, Catherine Zeta-Jones, despite their recent separation. 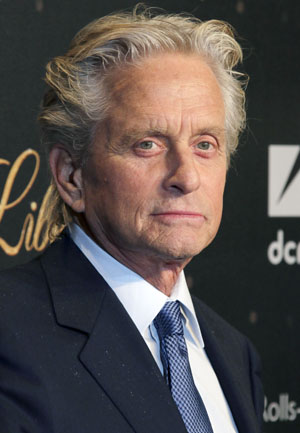 Even though they took some time apart recently, Michael Douglas and Catherine Zeta-Jones are still married — at least that’s what the Wall Street star is claiming.

Talking to reporters while at the Berlin premiere of his new movie Behind the Candelabra, Douglas assured everyone that his marriage is intact, TMZ reported. “I’m married” he said when a reporter asked him why he was still wearing his wedding band.

According to Hollyscoop, Douglas told another reporter that things with Zeta-Jones were just fine.

“I have a crisis at home?” Douglas said, “No, I think the press has a crisis. We are fine. My wife and I are, are fine.”

However, he also later revealed that “we’re on a temporary separation,” which would indicate that everything is actually not fine at home.

But, unlike other claims that speculate the couple will be divorcing soon, Douglas is insisting that the split is only temporary,

The reports of a split between Douglas and Zeta-Jones first came last week, claiming that the pair was taking a break from each other temporarily. Their rep confirmed the news, saying that they were now separated. The split could be just temporary, but Douglas did travel to Berlin alone and he was also seen vacationing solo on a yacht in France.

The reasons for the split, Hollyscoop claims, could be due to Zeta-Jones allegedly being addicted to prescription drugs. The New Zealand native has bipolar II disorder, and entered treatment for the condition at least twice. Reports have claimed she became dependent on her medication.

Additionally, Douglas’ battle with throat cancer, which he ultimately beat, put a strain on the marriage due to the stress from the disease.

Meanwhile, neither Douglas nor Zeta-Jones has filed for divorce or moved toward a legal separation. Those close to the couple told People magazine that “they want the best for their kids, no matter what happens.”

Douglas has two children with Zeta-Jones, a 13-year-old son named Dylan, and a daughter, Carys, who is 10.