Despite an *NSYNC reunion at the 2013 MTV Video Music Awards, Miley Cyrus’ performance ended up being the most-talked about. But was the whole thing a clever plan? 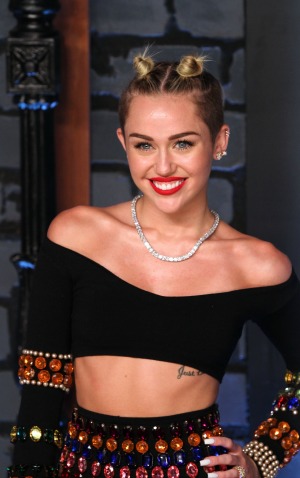 It seems like everyone has commented on Miley Cyrus’ performance at the MTV Video Music Awards, except Miley Cyrus. Until now.

The singer sat down with MTV to talk about the fiasco, and said the whole thing was done for its shock value.

“Me and Robin [Thicke] the whole time said, ‘You know, we’re about to make history right now,'” Cyrus said.

Before the show, Cyrus compared her performance to the Britney Spears/Christina Aguilera/Madonna kiss at the 2003 VMAs. The 10-year anniversary of the kiss seemed to be the perfect time to up the shock value once again.

“I don’t pay attention to the negative because I’ve seen this play out so many times,” Cyrus explained. “Madonna’s done it. Britney’s done it. Every VMA performance, that’s what you’re looking for; you’re wanting to make history.”

MTV is filming a documentary on Cyrus, and the interview was apparently just a small part of that.

Other celebrities have opened up about the performance, including Cyrus’ dad Billy Ray, and Justin Timberlake.

“Listen, man, you know, it’s the VMAs. What did you guys expect?” Timberlake said. “I like Miley. I like her a lot. I think, you know, she’s young. She’s letting everybody know that she’s growing up.”

Cyrus’ co-conspirator in the performance tweeted to the former Disney Channel star after the show.

That was dope. Shout out to @MileyCyrus @kendricklamar @2chainz #VMA pic.twitter.com/Lva7RV8tAG

It looks like Cyrus did the performance purely for attention, and that’s exactly what she’s getting.

“They’re overthinking it,” she explained. “You’re thinking about it more than I thought about it when I did it. Like, I didn’t even think about it ’cause that’s just me.”

Cyrus is obviously proud of being herself, but that doesn’t mean she’s without problems. The singer recently said she’s anything but normal.