Pippa Middleton loved being a part of her sister Kate’s fairy tale wedding, and if the rumors are true, she may soon be walking down the aisle herself. 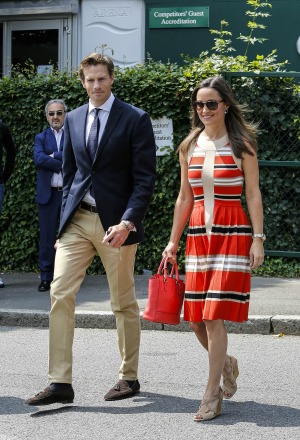 Philippa Charlotte Middleton, or better known as Pippa Middleton is the sister of beautiful Duchess of Cambridge Kate Middleton.

Pippa was at Kate’s side when she walked down the aisle to marry Britain’s Prince William in 2011.

If recent reports are correct, the brunette beauty may now be walking down the aisle herself with her stockbroker boyfriend Nico Jackson.

The socialite has been dating her beau for about six months, after they met at a London nightclub last year, and it is reported that both of their families are thrilled with the relationship.

Jackson’s mother has gushed to the Mirror about how happy she is with her son’s girlfriend.

“We are very pleased, and yes, they seem very happy — so that is the perfect answer for them, isn’t it? We have met and she is absolutely charming. I really cannot say any more.”

According to Sunday People, the couple will officially announce their engagement during Pippa’s 30th birthday celebrations, which are due to take place on Friday.

Apparently, a source, who is an unnamed “friend,” revealed to the paper that the two got engaged shortly before the Wimbledon Championships in July. However, the couple opted to keep the news secret so as not to distract any attention from the birth of the royal baby Prince George, who was born on July 22.

“They didn’t want to take the shine off Kate [Middleton] and her baby,” the source said.

“Pippa loved seeing Kate go down the aisle and now it is her turn for a fairy tale wedding.”

“She couldn’t be more sure that Nico is the right man for her. They are such a good fit for each other and their families get on really well. Everyone is so happy for Pippa,” the source added.

In fact, the rumors go one step further — there have even been several media reports suggesting Pippa will walk down the aisle as early as next spring!

The engagement rumors have not been confirmed by either party, but we are already wondering if Kate will be a bridesmaid?

However, for now we will be treating these reports with skepticism and eagerly awaiting Pippa’s birthday bash for any engagement updates.