This past weekend has been a great one for celebrity marriages, and Seth Meyers and Alexi Ashe join the list. 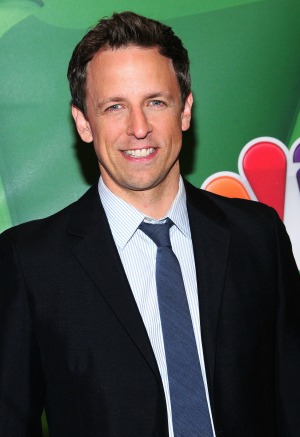 This past weekend was certainly one for celebrity marriages, with Kate Bosworth marrying her soulmate Michael Polish and Seth Meyers getting hitched to Alexi Ashe!

According to Us Weekly, the beautiful bride wore a cap sleeve lace dress while Meyers opted for a dark-colored suit.

The ceremony took place on Sept. 1, and included around 150 guests, several of which are famous, including Jake Gyllenhaal and his girlfriend Alyssa Miller, Olivia Munn, Olivia Wilde and Jason Sudeikis, Jimmy Fallon, Kristen Wiig, Tina Fey and Amy Poehler.

According to Us Weekly, the pair had their rehearsal dinner the night before in the picturesque setting of Beetlebung Farm House, where all the guests sat at tables surrounded by freshly grown produce and flowers.

Meyers and Ashe had dated for several years, but apparently were in a hurry to make things official as they got engaged less than two months ago in July.

Reportedly, right after Meyers proposed, the couple sent out an email to friends with details about the upcoming nuptials.

At the time of the engagement, a source revealed to Us Weekly, “He’s very excited for the next phase of his life.”

“He’s known that she’s The One for a while, but it was all about timing.”

There’s more good news for Meyers as he will take over NBC’s Late Night show, so it’s not only a rise in relationship status, but also career status! Congratulations to the happy couple.