It was a big night in The Big Easy as former *NSYNC band member Lance Bass proposed to his boyfriend Michael Turchin. The couple are excited to get married. 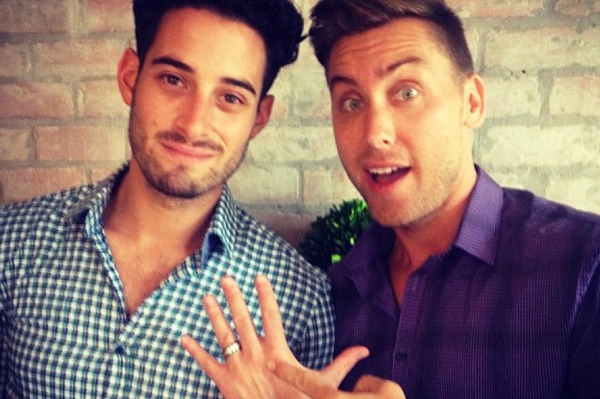 Love is in the air this holiday weekend! Not only did Kate Bosworth get married, another Hollywood couple took the first step toward taking the big plunge.

On Sunday, Lance Bass shared the big news with his fans on Twitter, saying, “He said YES!! Love this man.”

The photo shows the happy couple posing with the engagement ring that Bass gave to his boyfriend of almost two years, Michael Turchin. The engaged duo began dating in December 2011. Turchin is an aspiring actor and model.

He tweeted his joy after Bass proposed.

People magazine spoke with Drew Pokorny, Bass’ co-host on Dirty Pop with Lance Bass on SiriusXM, about the big news.

He shared, “They’re so great together. I’m completely thrilled for them. Lance had his heart set on asking Michael here in New Orleans and celebrated with some of his closest friends from Mississippi and L.A. who came in for the weekend.”

The radio show is broadcasting in The Big Easy over the long weekend, so the city was the perfect romantic backdrop for the proposal.

Bass is coming off a big week with the reunion of *NSYNC at last Sunday’s MTV Video Music Awards. The band came together to perform in honor of former bandmate Justin Timberlake’s big night as the recipient of the Michael Jackson Video Vanguard Award.

After the wedding, look for Bass and Turchin to start a family.

The former boy-bander told People in 2011, “I’m a Southerner. [I] dream of having the family and the kids, and the parents want grandkids — that’s all they care about, give me some grandbabies.”