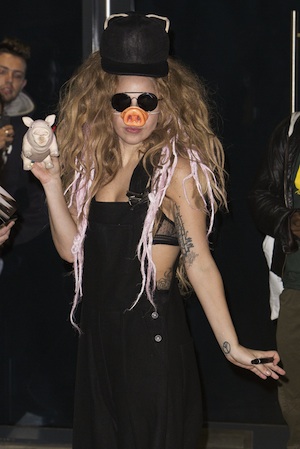 Lady Gaga gave all of us Little Monsters a three-song taste of what to expect from tomorrow’s iTunes Festival performance.

If these tracks are any indication, from industrial to pop to funk, Gaga’s upcoming ARTPOP is going to be one crazy, diverse album.

But the song soon turns industrial, and Gaga goes all Nine Inch Nails as she bangs on a drum kit.

Gaga doesn’t give us a name for the piggy song. NIN already took “March of the Pigs,” so for now, we’ll just refer to it as the Twitter hashtag she posted: #Swinefest.

Gaga will do anything for your applause >>

But #Swinefest isn’t the only song we got to hear. Gaga posted two other rehearsal videos. One of the minute-long clips is for an upbeat addicted-to-love anthem called “MANiCURE.”

The other clip Gaga released is a funky Prince-like song called “Sex Dreams.”

Lady Gaga’s iTunes Festival performance will be broadcast on iTunes from London’s Roundhouse. Gaga will be taking the stage Sept. 1 at 4/3c, and from the looks of the rehearsals, this is one online concert not to miss!

What do you think of Gaga’s new ARTPOP songs? Do they make you want to buy the album? Are you going to tune in to the iTunes Festival to see Gaga’s performance? Let us know in the comments below.