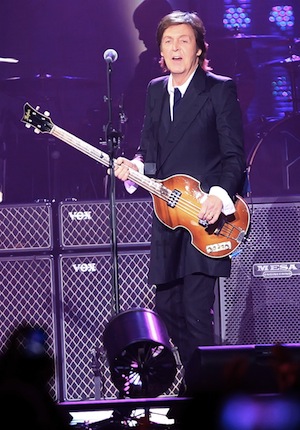 Most people think of being retired at 71 — perhaps knitting a sweater by the fireside, doing the garden or digging the weeds. And then every summer renting a cottage in the Isle of Wight. You know, if it’s not too dear.

Instead of retirement, the former Beatle has been busy in the studio making both new music and music that’s “New.”

Produced by disc jockey Mark Ronson, “New” may be the first original music McCartney has released since 2007’s Memory Almost Full, but with the bouncy beat, hand claps, horns and “doo do doos,” “New” sounds remarkably like it could have been released on 1969’s Yellow Submarine.

In the song, McCartney sings, “We can do what we want/We can live as we choose.”

Now correct me if I’m wrong here, but add “It’s our party” in front of each of those lines and you have Miley Cyrus‘ “We Can’t Stop.”

Could a Miley/Macca mashup be far off?

“New” is the first track we’ve heard from Paul’s upcoming album of the same name, due out on Oct. 15 here in the states. iTunes will offer a deluxe edition of New with two extra tracks.

The single “New” is available to purchase now.

Baby names inspired by The Beatles >>

What do you think of Sir Paul’s “New” song? Will you be buying his New album? Let us know in the comments below.