Two reality show stars are divorced and happy. Adrienne Maloof and Paul Nassif call a truce to their former war of words to raise their boys in peace 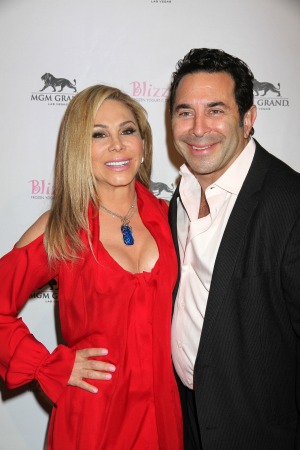 One of reality TV’s ugliest divorces just had a happy ending. On Thursday, Real Housewives of Beverly Hills former stars Adrienne Maloof and Paul Nassif gave a public update about their relationship.

While the couple is officially divorced, they’re also moving forward as friends.

They informed their fans in a joint statement that they had “reached an agreement on all outstanding issues related to our divorce settlement and all pending litigation.” The couple had been mudslinging back and forth in the press for over a year.

The couple reportedly had a prenuptial agreement to protect Maloof’s $300 million empire. Their next step is to focus on their three children, sons Gavin, Collin and Christian.

The ex-spouses said, “Our first priority is our childrens’ well-being and happiness. As their parents and advocates that is our goal. Our children are our most important treasures and need to be treated with the respect and privacy they deserve. We’re happy to be moving forward with our lives in a positive way not only individually but as co-parents.”

Both Nassif and Maloof have exited the Bravo reality show and seem to be much happier living their lives privately versus under the constant glare of TV cameras. The gambling mogul has had an on-again, off-again relationship with Rod Stewart’s 32-year-old son Sean while her plastic surgeon ex-husband has also been seen hitting the dating scene again.

With that happy ending, they both seem to want to wish each other well and raise their boys in harmony.

They stated, “This is a new beginning for each of us. Our goal is for our children to have stable and nurturing relationships with both of us so we can all find as much happiness as possible. We appreciate the good wishes we continue to receive from our supporters around the world.”