It’s been a very bad day for Lamar Odom. First he’s arrested for a DUI and now, the media is revealing another arrest that happened over a decade ago. 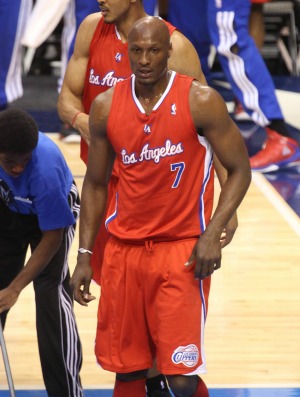 Lamar Odom is a man struggling with life right now. He’s been accused of infidelity, marital strife and drug abuse in the last few weeks. In addition to being arrested for a DUI on Friday, the NBA player has to deal with a secret arrest from his NCAA days.

RadarOnline is reporting that Odom was arrested for the solicitation of a prostitute in Las Vegas, Nevada back in 1997. Besides that shocking news, the gossip site reveals that his wife Khloé Kardashian is not aware of this charge.

Sixteen years ago, the basketball player headed to the University of Las Vegas on a college scholarship to play for the Runnin’ Rebels. One night while hanging out with a friend, “Lamar approached a woman he believed to be a prostitute,” according to a RadarOnline source.

Of course, that “prostitute” was a female undercover cop who was part of a neighborhood sting.

The source continued, “He used bad judgment, and was only goofing around with his friend. Lamar was 17 at the time, and was trying to show off for his friends.”

The case was dismissed and Odom only had to pay a small fine. His college basketball days were limited, too. Sports Illustrated questioned the authenticity of his ACT scores. As a result of their article and the ensuing scandal, UNLV was forced to dismiss the athlete from their program.

Living with an addict: Should you stay or go? >>

Kardashian may be surprised by this latest news, but the insider seems to have an understanding as to why her husband never disclosed his past arrest history.

The source said, “Lamar never felt the need to tell her because it happened so long ago, and he was acting like a punky stupid teenager. Khloé has put Lamar on a pedestal during their marriage, and he didn’t want her to ever know about it.”

The 33-year-old basketball star is without an NBA team to play for and his marriage is on shaky ground, so Odom needs to clean up his act quickly.