Are you ready for Romancing the Joan? Here’s a sneak peek at what you should expect! 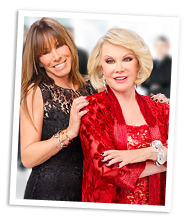 Are you ready for Romancing the Joan? Here’s a sneak peek at what you should expect!

Is there anything on television Joan Rivers doesn’t have her hands in? Now she’s even taken to the internet with our exclusive matchmaking web series, Romancing the Joan. We can’t wait for you to see it, because we just know you’re going to love it. Why? Because it’s crazy funny.

Watch her tongue! Rivers’ best quotes from Romancing the Joan >>

The bachelors scent gents start off just like all the other guys on dating shows: by pledging their love to Rivers. Those introductory moments are always so awkward. How can you confess your love for someone when you’ve never even met them before or been on a date yet? Leave it to Rivers to make things even more awkward. How? Spoilers, darling!

These gorgeous guys aren’t all perfect, either. There’s the overly emotional guy and the overly attached guy. Of course, there’s also the scent gent who’s only in it to expand his acting portfolio and become the new reality king. Will Rivers catch on to his devious ways? Obviously! But will she care? How could she? The Joan knows that using other people to get what you want and need is just a necessary evil in life. She’s certainly used her quick tongue and first impressions of fellow celebs to help keep her name in the tabloids.

Despite only have seven episodes in the series, there are still plenty of chances for Rivers to get to know her guys. For instance, there’s a trip to the beach where each gent spends a little bit of time in a carriage with Rivers. Later, we’ll see the men get tangled up in two physical challenges that, above all else, are a blast to watch. She may not learn their deepest desires, but she’ll know what they look like when they’re all lubed up.

We don’t know about you, but that’s really all that matters when trying to score a date.

But will she find true love? Perhaps a better question to ask is: Does true love even exist in Hollywood? All we can tell you for now is that there is a winner. And, yes, someone gets lucky with Rivers. (Notice we didn’t say who!)

Want all the latest news on Joan Rivers? Try our newsletter >>

Can’t wait for the web series to premiere on September 9? Watch the official trailer teaser below and then check back here for more sneak peeks!