Kate Middleton made a surprise appearance with Prince William at a marathon in Anglesey today, and although they didn’t run they did get the whole crowd buzzing! 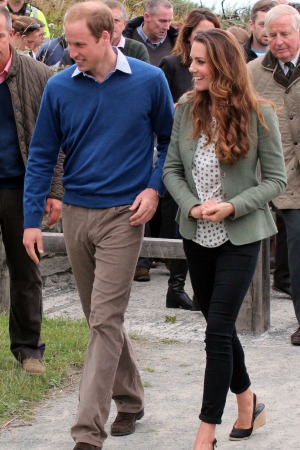 Baby weight? What baby weight? Kate Middleton made her first official public appearance today since the birth of the royal baby, and she looks amazing.

The couple left little Prince George at their nearby cottage while working the crowd at the Ring O’Fire Anglesey Coastal Ultra Marathon, where Prince William got the race started with the ringing of a bell.

Middleton’s appearance was a big surprise for the waiting crowd as only Prince William was originally scheduled to come.

“Initially the Duchess wasn’t going to attend but she was also keen for the chance to thank the people of Anglesey herself for the warmth and hospitality they have shown her and the Duke,” a source told the Daily Mail.

The Duchess looked fabulous as usual, sporting the slingback wedges we first saw the day after her glamorous royal wedding, a pair of her favorite dark J Brand skinny jeans, a loose patterned top from Zara and a sage-green blazer with her hair in beachy waves.

She also looked quite well-rested, and revealed that she has the help of her mother to babysit as well as the luck of a baby who actually sleeps.

“He’s doing very well. He’s with granny at the moment. He’s sleeping well but I know these things suddenly change,” she told a local in the crowd.

While some have complained that Middleton’s already slim figure perpetuates an unhealthy fixation on shedding the baby weight too quickly, the Duchess has always had a slender figure and kept her weight gain at a healthy minimum during her pregnancy.

Middleton now has a little less than two weeks left of her royal maternity leave before her next scheduled public appearance, the Inaugural Tusk Conservation Awards in London on Sept. 12 where we’re sure to see her in a stunning evening gown and possibly some royal jewels.