New York Times best-selling author of On the Island, Tracey Garvis Graves, returns with another captivating novel that will grab you from Page 1 and hold on tight, long after you’ve finished reading. Her latest, Covet (Sept. 17), is our pick for the Red Hot Book of the Week. 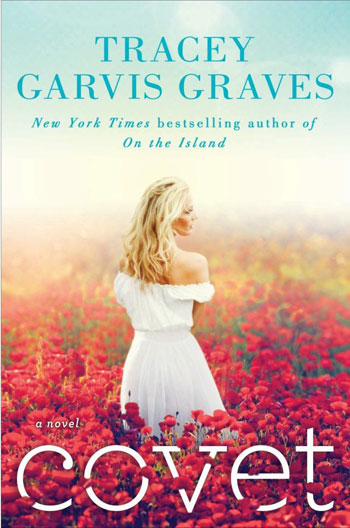 Covet asks this question: What if the life you wanted, and the woman you fell in love with, belonged to someone else?

Chris and Claire Canton’s marriage is barely surviving. Chris has been out of work for a year and has retreated to a point where his wife, Claire, wonders if he’s suffering from depression.

Their marriage begins to unravel rapidly, so when Chris is finally offered a position that requires him to travel away from home as many as four nights a week, Claire agrees, but deep down, she wonders if this will drive them even further apart. They are already so disconnected. She is already so lonely.

Can their relationship survive with even more distance between them? The last thing she wants to think about is the possibility of divorce.

So when Daniel Rush, a local police officer pulls Claire over during a routine traffic stop, she could never anticipate that their discussion over her broken tail light could lead to something more. But when they run into each other again at a local parade, there is still an undeniable spark. Claire is then hired to do some graphic design work for the police department and her friendship with Daniel grows. Soon, they are spending a lot of time together. Time that she’s not necessarily telling her husband about.

Daniel knows Claire is married and their relationship can never become something more. But it seems they teeter right on the line, toying with the possibility, but are afraid to cross it. Because they both know what crossing that line will mean. But despite their self-control, they are both quickly in way over their heads. And Claire wonders if she might end up losing everything.

This is a beautifully written story about just how quickly life can change, even one that’s seemingly perfect. You’ll be hooked from the first sentence and left thinking about these characters long after you read the final words of the novel. Covet was our obvious choice for the Red Hot Book of the Week.

Tracey Garvis Graves’ first novel, On the Island, was a runaway self-publishing hit that led to a publishing deal with Penguin.

Read more about Graves’ novel, On The Island >>