Will Naya Rivera and Demi Lovato’s characters hook up on Glee? Sounds like it! 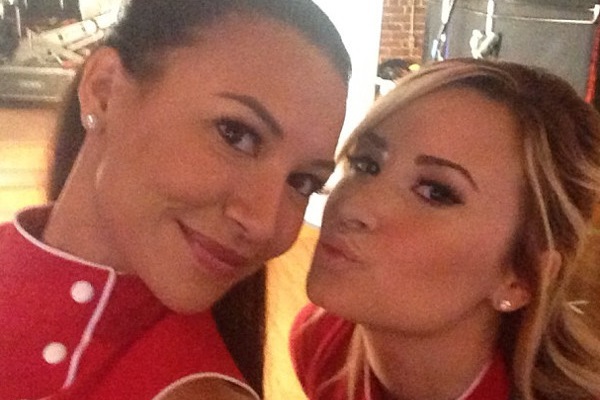 Last week we told you a little more about Demi Lovato’s upcoming guest appearance on Glee. She’ll play Dani, a struggling artist in New York who will be friends with Rachel and Santana. We also know her story-arc will last five episodes and that she will interact with another big-named guest star, American Idol’s Adam Lambert.

Thanks to Naya Rivera, though, we now know even more!

Rivera recently posted an adorable photo of she and Lovato getting cheek to cheek in some bright red and white costumes that appeared to be flight attendant uniforms. Along with the photo, Rivera (who plays Santana on Glee) tweeted, “Fancy. @ddlovato #goodside #dantana?” Why else would you combine names unless you’re “shopping” two characters like Santana and Lovato’s Dani? Eeek!

The news was actually confirmed by Rivera during the VMAs, too. While on the red carpet, MTV asked Rivera what she thought of working with Lovato and she was all smiles when she responded.

“I mean, she’s playing my love interest, so I’m very, very excited about that,” she said. “We get to sing a song together. It’s gonna be good. I’m excited to work with her.”

According to E!, Lovato’s rep is staying mum as to her Glee character’s status. However, we have all the info we need straight from the Glee-ster’s mouth! Thanks, Naya — You Rock!

Lovato will make her Glee premiere during the second half of Glee‘s Beatles tribute on Oct. 3. Glee returns to the tube on Sept. 26 at 9/8c on Fox.

For all the latest TV scoops, sign up for our newsletter >>