At least, that’s how Britney Spears described Charity Gaye Finnestad’s first book, Hollywood in Heels. We had a chance to ask her a few questions about the memoir, and we even have an excerpt from the book. 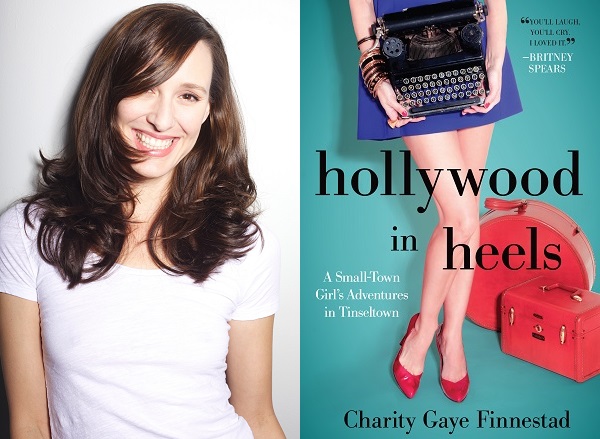 Want to know how it all begins? Click over to the next page to read the first few paragraphs of the memoir.

SheKnows: Give us the 140-character Twitter pitch for Hollywood in Heels.

Charity Gaye Finnestad: A small-town girl’s quest to find love and happiness in a city where sex is the primary commodity and illusion the name of the game.

SK: Was it difficult to divulge some of the details? Did you have to rethink how you would introduce and describe the characters?

CGF: When I first started writing the book, I worried a great deal about how the men in it would feel about me if they read it. I was literally paralyzed by the desire to be loved and viewed favorably by everyone I had ever loved.

I tried writing my first draft of the chapter titled “Love Lenses” about the Duck, and it sucked! I’d watered down the truth so much it was milquetoast at best. I realized if I candy coated things, I would rob the story of its power and lesson.

All along, one of my hopes for this book has been that girls might recognize themselves in my stories and learn from my mistakes instead of having to make them themselves. So the question became, did I want to be loved by the Duck, or did I want to help as many girls as I could learn to love themselves? I chose the girls.

SK: What was the biggest lesson you’ve learned living in Los Angeles?

CGF: The biggest lesson I learned in LA is never give up. Be flexible. Allow life to guide you and course-correct you, but don’t stop striving for your highest dreams and your loftiest goals. Things that one day seem unimaginable can later on become commonplace.

Another thing I’ve learned is to be insanely grateful for everything given to me. In my years living here, I’ve seen many sweet, naive souls transform into entitled asses who in no way resemble their former selves. They make the textbook mistake of confusing a jaded demeanor with sophistication. I never want to do that. I would much rather have stars in my eyes than ice in my blood.

SK: You wrote this book after having a kid. How has having a child changed your outlook on life? Or has it?

CGF: Well, for starters, I now wake up at the crack of dawn instead of going to sleep at that time. That alone is enough to make one’s life do a 180. Who knew how much one could accomplish before 10:00 a.m.? Kids change everything, and I mean everything! I’d have 10 novels under my belt if I could have that time back now.

Your priorities shift, too. I, who used to love being out every night, practically have to be dragged away from my home in the evenings now. I happily turn down red-carpet movie premieres and the like with the famous and infamous for yummy evenings tucking in a squirming, stinky little man who kisses me and says, “I think I might be falling in love with you, Mommy.” Melt me! Dirty-little-boy kisses and wiggles are divine.

SK: What do you hope your readers get out of this book?

CGF: Truthfully, there are a lot of things I would hope they take away. Like I said, I very much hope it is a comic manual for girls on what to, and not to, do in relationships and life. But no doubt, the most important message is the final one, “Screw external illumination. Just be the bulb!” That is my desire: to be that incandescent, filigree-filled bubble of glass — not the person it shines on, but the light itself!

SK: What advice would you give to aspiring writers?

CGF: For aspiring writers, I would say: Just write. Write every day. Be disciplined. Don’t worry or think about publishers, agents or audience. Write for yourself. Finish your story. Complete your project, and then start the process of finding a way to get it out there. When you have gotten to that point, I recommend utilizing the greatest equalizer of all — the internet — and blog to find your audience. Until then, don’t waste your time with anything but finishing your book, play or film. You have to turn your ideas into a real, physical thing so other people can have the opportunity to discover them.

SK: Which author(s) inspire/influence your writing?

CGF: I’m madly inspired by authors like Anais Nin, Pablo Neruda and Victor Hugo, to name a few. Reading them made me want to be a writer. But I think the more direct influence on my writing style with this book came from more modern sources: the funny ones — writers who wrapped big truths in robes of humor — people like David Sedaris, Tina Fey and Chelsea Handler, people who made me laugh so hard I sprayed soda out of my nose and had what looked like epileptic fits poolside while getting nasty looks from my fellow sunbathers. Those crazy nuts influenced this book. If you don’t giggle at least once while reading this book, I have failed horribly! My goal was at least one set of damp panties because someone lost it so bad they leaked.

SK: What books are on your reading list right now?

CGF: I am currently in the middle of 1493 by Charles C. Mann, a brilliant biology/history book that documents how radically bird sh*t (for example) has impacted the makeup of the modern world. I can’t put the book down. It’s utterly fascinating how interlinked we all are and how seemingly random biological things have deeply impacted the very cultural fabric of our world.

I recently finished How to be a Woman by Caitlin Moran and nearly peed my pants laughing on more than one occasion.

And my go-to giveaway book at the moment is Vagina by Naomi Wolf. At last count, I had given away over 21 copies of it, and I’m not done yet. Everyone alive should read this book. If they did, we could skip years of slow evolution and have a planetary leap toward health and happiness for all. Yes, I really believe that!

SK: What’s your next big move? Any projects on the horizon?

CGF: I’m working on a novel titled Mercy Me. I finished the first draft of it two weeks ago. Now I am taking a mandatory three months away from it before I pick it up again and take a stab at the second draft.

Up next: Read an excerpt from Hollywood in Heels