With ingredients chosen by the judges’ kids and a cameo by Paula Deen, Week 14 of MasterChef proved epic for the final five. Chef Graham Elliot fills us in on his son Conrad’s Mystery Box mischief, the contestant whose heart is even bigger than his accent and his favorite Southern-fried fare. 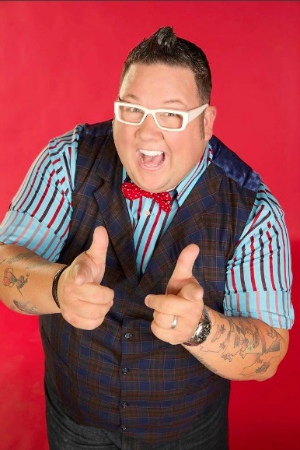 SheKnows: Last night was a big night full of surprises! Which Mystery Box items in particular picked by you, Gordon and Joe’s sons made you laugh the most?

Graham Elliot: The coconut, the candy sprinkles and the individually-wrapped cheese slices. Regardless of how refined their palates are, they still gravitate toward bright colors and things they probably know are bad for them.

SK: Conrad is too cute. What were his contributions to the box?

GE: The sprinkles and chocolate hazelnut spread. He spent the rest of the time throwing oranges around the pantry and swinging a cucumber at the other kids.

SK: He’s two and a half… what kind of things do you cook for him at home?

GE: It’s our nightly routine to cook a late-night snack of scrambled eggs when I get home from the restaurant. He gets his stool, and he cracks his own eggs and stirs — the whole deal.

SK: Gordon and Joe’s sons — who were like little carbon copies of their dads — were all impressively polite. Were there any shenanigans behind the scenes we didn’t see?

GE: Nope! What you see is what you get. All of the kids got along great — they hung out and played before and after filming the show.

SK: James managed to make a restaurant-quality dessert with the mish-mash of ingredients and had to choose a dish with special significance to you, Joe or Gordon for the other chefs to cook. How would your soft-shell crab sandwich have tripped up the home chefs?

GE: Well, there’s a special technique to cleaning the crab that they would have needed to figure out and — similar to the calamari — the pan has to be exactly the right temp to evenly brown the outside and cook the center. They also would have had to make an aioli and make sure it was the right balance of richness and acidity to work with the naturally sweet crab.

SK: Natasha forgot to grab garlic for her Vietnamese pork-noodle soup and had to borrow some from Luca. Is he seriously the sweetest guy ever?

GE: One-hundred percent! We always talk about how he is funny and nice to a fault. And I think it comes out in his cooking and personality

SK: I thought for a minute that the garlic wasn’t going to matter, because y’all made it look like you were sending Natasha packing! How long did you judges deliberate before deciding to keep all five contestants?

GE: We went behind the glass and chatted at least three times because it was that close. We are looking for the best amateur home chef, and we don’t want feel pressured to eliminate someone who shouldn’t be going home.

SK: The biggest challenge last night for the home chefs was whipping up a big Southern meal for a group of charity workers being hosted by Paula Deen. What was your impression of her?

GE: Paula played an integral part in moving the competition forward to the MC final episodes, choosing — along with Gordon, Joe and myself — the two finalists who skip a competition round to advance to the top four.

GE: It’s a tie between fried chicken, shrimp and grits and biscuits and gravy.

SK: Luca got to dole out chicken, alligator, catfish, pork chop and shrimp to the home chefs — including himself — for the challenge. Which would you have preferred to cook?

GE: The alligator because its intimidating and exotic enough to scare the other cooks, but it’s actually easy to tenderize, flavor and prepare. It would be a good psychological move against the other competitors.

SK: Jessie and Luca, who rocked the Vietnamese pork-noodle soup, came out on top in the Paula Deen challenge too! Is it rewarding to see such good people shine in the competition?

SK: James, Natasha and Krissi had to face a serious pressure test back at the MasterChef kitchen… replicating signature dishes by you judges. Did you suspect your panna cotta dessert would be the one to send someone home?

GE: It’s definitely technical and requires a lot of finesse for plating, but both Gordon’s and Joe’s were equally tough, so it was anyone’s game.

SK: It sucks every week at this point seeing someone go, but I was really rooting for James. What gave Krissi the edge over him?

GE: Aside from the beef being closer to medium, Krissi’s dish was spot on — which I think surprised even her. James’ obviously didn’t set, making it the worst dish.

SK: I’m not a fan of Krissi making it to the final four — something I’m sure you’re tired of hearing already. Is she as volatile next week as the teaser preview suggests?

GE: Next week is as bad as it gets… that’s all I’m going to say!