Artists can’t rely on MTV for a big world premiere video release anymore. So what’s a megastar to do? Well, if you’re Jay Z and you want the world to see “Holy Grail ft. Justin Timberlake,” you turn to Facebook. 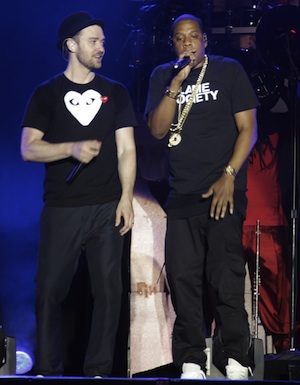 You may have been surprised by your Facebook news feed this morning.

Between the posts of that one girl who is pregnant again, your high school crush’s family vacation photos and the guy who really hopes that everyone turns their attention away from Miley Cyrus and toward Syria, you may have seen that Jay Z posted his new video.

How much money do Beyoncé and Jay Z have? >>

Not only does he use it, but for right now at least, Facebook is the only place that you can see his new video “Holy Grail ft. Justin Timberlake.”

Nick Grudin, head of content partnerships for Facebook, explains that Jay Z releasing his video exclusively on Facebook “will really allow him to go direct to a massive and instant global audience. It’s something that only Facebook I think can really deliver in this way, given the scale of the audiences musicians have and the global nature of those audiences and the social dynamics of what happens when they engage on Facebook.”

And just how many people will this video reach? Well, Jay Z has about 17 million Facebook fans. J.T.? 25 million. Add it up and that’s a lot of ears.

Jay Z, who is notorious for bagging on social media in his songs, took to Twitter the day before the album’s release and answered fans’ questions. He also performed his song “Picasso Baby” for six hours straight in a New York gallery.

Like him or hate him, Jay Z is a very shrewd businessman and while the “Holy Grail” video was the first clip by a major star to premiere on Facebook’s proprietary video player, considering the site’s popularity it certainly won’t be the last.

Warning, this video is NSFW due to language.

Are Facebook releases the wave of the future or just another marketing scheme for Jay Z? Let us know what you think in the comments below.