Liam Hemsworth is embarrassed by the outrageous behavior of his fiancée Miley Cyrus and might just dump her to save his own career. 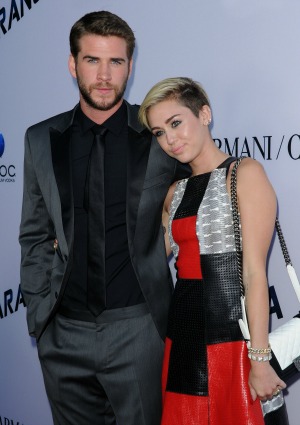 Miley Cyrus may have just twerked herself out of her relationship.

Sources close to her and fiancé Liam Hemsworth say The Hunger Games star has had enough of Cyrus’ outrageous stunts and is close to walking out.

“Liam really does care about Miley, but her racy new look and sort of ghetto attitude isn’t exactly what he signed up for,” an insider told RadarOnline.

“Her VMA performance absolutely mortified him and he couldn’t be more embarrassed. He doesn’t really see anything sexy about what she did onstage.”

Hemsworth is reportedly facing added pressure from his industry reps to dump the former Disney star, who say she is bad for his “serious” acting career.

6 MTV VMAs performances that were way raunchier than Miley Cyrus’ >>

“It’s not just Liam that Miley is pushing away,” the source explained. “His entire team is urging him to part ways with her because she’s nothing but negative for his reputation and career.”

“Liam is a serious actor with a growing career, while Miley has just turned into a joke.”

“It’s pretty much over. He knows he can’t stay with her when this is who she’s become,” the source added. “He doesn’t want to babysit her anymore. He has to move on.”

The couple’s relationship has been in question for quite some time now, with the pair rarely making any public appearances together and Hemsworth facing cheating allegations earlier this year — although Cyrus continues to insist the couple is still engaged.

Cyrus can count one victory on her side, though: “twerking” is now in the dictionary. The Oxford Dictionaries Online added the butt-shaking move to its quarterly updated list because “by last year, it had generated enough currency to be added to our new words watch list, and by this spring, we had enough evidence of usage frequency in a breadth of sources to consider adding it to our dictionaries of current English,” a spokesperson told the BBC.