After her raunchy VMAs performance, Miley Cyrus skipped out on her own after party and headed to a top secret studio location… to meet Kanye West. 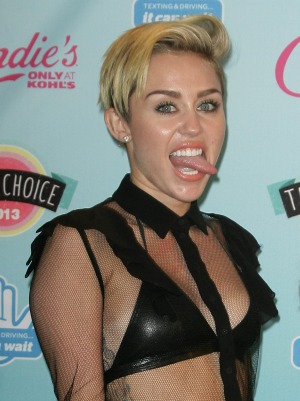 Well, if we didn’t know better and we do, we’d think that Miley Cyrus and Kanye West‘s secret texts were a blossoming affair.

According to the New York Post, Cyrus skipped out on her own VMAs after party, which was held at New York’s No. 8 club.

It was the party that Cyrus should have been celebrating at for the stir she created during her raunchy twerking performance with Robin Thicke, during the hit single “Blurred Lines.”

West was also suspiciously missing from P. Diddy’s after party, because instead of partying he and Cyrus headed straight to the studios in a super secret location to reportedly record a remix of West’s song “Blkkk Skkkn Head.”

The text conversation between West and Cyrus that shows the two making plans to meet at a studio on Sunday night have been revealed. Although we are not sure how these texts got leaked, according to Page Six, they seem legitimate.

The texts say the following:

West: even when you’re texting, you just can’t keep that tongue in, huh? LOL

Cyrus: it’s true, I cant stop!!! GET IT? BECAUSE THE NAME OF MY SONG? HAHAH

[10 minutes without a response from Kanye]

West: every headline tomorrow’s gonna be about you. that’s what it’s all about, getting people talking. steve jobs always said that.

Cyrus: KIDDING OMG LOL I AM SUCH A DORK

West: kris jenner just texted me that she wants a twerking lesson 🙁

Cyrus: rotfl. did kim say anything about my performance?!?!?

Both Cyrus and West had performed at the MTV VMAs with West due to perform “Blkkk Skkkn Head,” but he reportedly changed his mind at the last minute and instead rapped “Blood on the Leaves” — another track from his recent Yeezus album.

When West’s album released early he was not upset and his reactions are aligned with comments he made at the the Yeezus listening party in New York City.

So, will the collaboration between West and the “We Can’t Stop” singer be released sooner than we expect?