Unlike her BFF Taylor Swift, Selena Gomez does allow herself to read what people write about her. But she says it’s most unfair when people make things up without really knowing. 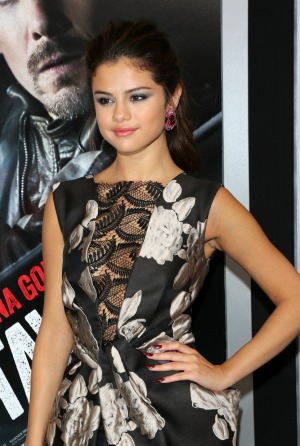 Selena Gomez has paved her own way in Hollywood, but for a long time was known as Justin Bieber’s girlfriend. She is working hard to regain her own name as a talented actress and singer, and is ruling both industries.

However, being in the spotlight, and especially being envied by thousands (or millions) of Beliebers, can really affect a person.

“It does get to me. I’m a human and I feel those emotions of when people talk about you,” Gomez told the New York Daily News. “It’s never a good feeling ’cause half the time it’s just bull, it’s not real.”

Fashion face-off: Selena Gomez vs. Taylor Swift at the VMAs >>

Gomez, who said she will take a step back from music after this album, recently hit a milestone when Stars Dance hit the number one spot on the Billboard 200, knocking off Jay Z from the top of the charts. The singer admitted the honor was bittersweet.

“It felt good, but I was still a little nervous because his following is very passionate and very committed,” she explained. “I did not think at all I’d get No. 1. It was such a crazy feeling and after four records having the fourth be No. 1 — it felt like I tried all styles of music and kept going until I got my sound.”

Gomez’s relationship with Bieber is very on-again, off-again, but she isn’t rushing into anything new. She said finding someone who meets her requirements isn’t an easy task, and admits she is “very picky.”

“I’m confident and I believe that you should have somebody who really does love you for who you are,” she said. “That’s the hardest part, just trying to find someone that will just love the core person and not anything else around it.”

Gomez just turned 21 and speaks beyond her years, but in the end she is just a 20-something working on growing up. She is currently starring in Getaway along with Ethan Hawke and Jon Voight, which will be in theaters Aug. 30.