Octavia Spencer is mad and she’s not going to take it anymore. The actress filed a lawsuit against weight-loss maker Sensa on Tuesday for breach of contract. 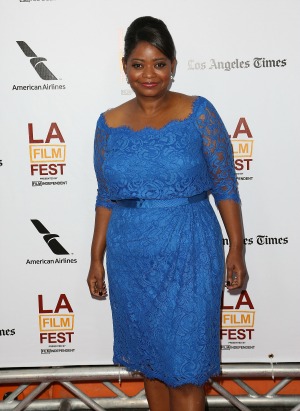 Octavia Spencer has been looking fit the last few years and it looks like she had a little help along the way. The Oscar-winning actress had signed an endorsement deal with the weight-loss product Sensa to share tips with others who were looking to get in shape.

That deal seems to have gone south now that Spencer has filed a lawsuit against the company for not honoring her contract and falsely accusing her of breach of contract.

According to The Wrap, the Fruitvale Station actress filed papers on Tuesday in Los Angeles Superior Court.

Octavia Spencer wants to be a “thick chocolate mint” >>

The suit contends that Spencer had strict stipulations for signing the contract including:

While that may sound like a difficult contract, Spencer wanted to talk more on healthy eating and overall lifestyle. She was to be paid in installments totaling $1.25 million in addition to a $100,000 charitable donation to The Help star’s foundation. Her charity organization targets fighting childhood obesity.

She claims she held up her end of the bargain by meeting the company’s weigh-in obligations. However, Sensa reportedly tried to place ads in gossip magazines and use the actress’ pre-and-post weight-loss photos.

The company failed to complete the contract by stopping payment in July and not honoring the charitable donation request. Sensa believes that Spencer did not meet their contractual agreement standards and that is why they stopped payment.

One final point of contention revolves around social media. When Spencer included the hashtag “#spon” in her tweets, they believe it violated her contract. What Sensa fails to mention is that the Federal Trade Commission guidelines require such disclosure for advertising and endorsements.

Sensa has not spoken publicly yet about the lawsuit, but Spencer is speaking volumes with her filing: breach of written contract and breach of the covenant of good faith, fair dealing and fraud. She is seeking damages, interest and court costs from her suit.