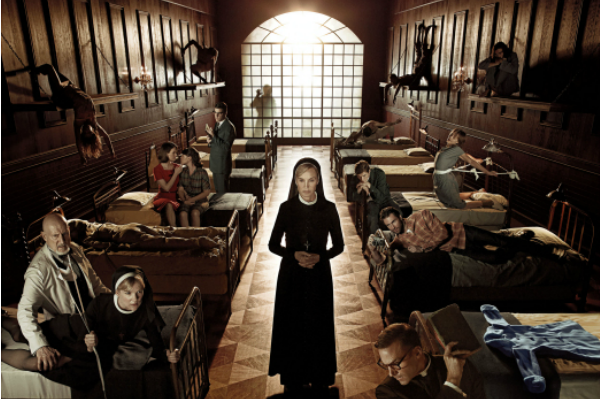 If you’ve been waiting with bated breath for information on FX’s third season of American Horror Story, you’ve come to the right place.

FX has set the premiere date for the new season, Coven, which will debut on Wednesday, Oct. 9 at 10/9c. It seems completely appropriate for the show to air just a few weeks before Halloween and should be a great way to get into the frightening spirit of the holiday.

E!Online reports that the new season will be exploring the dark magic of the world’s most powerful witches and that Jessica Lange will once again lead the cast. Season 3 will air a total of 13 episodes, with the final half of the season airing in January 2014.

The official press release for the season sounds positively sinful:

“Over 300 years have passed since the turbulent days of the Salem witch trials and those who managed to escape are now facing extinction. Mysterious attacks have been escalating against their kind and young girls are being sent away to a special school in New Orleans to learn how to protect themselves. Wrapped up in the turmoil is new arrival, Zoe (Taissa Farmiga), who is harboring a terrifying secret of her own. Alarmed by the recent aggression, Fiona (Lange), the long-absent Supreme, sweeps back into town, determined to protect the Coven and hell-bent on decimating anyone who gets in her way.”

In addition to Farmiga and the return of Lange, the show will welcome back Sarah Paulson to play Cordelia, Fiona’s daughter. Academy award-winning actress Kathy Bates has also joined the cast and will play Madame LaLaurie. Rounding out the cast (so far) is Angela Bassett, who will play Marie Laveau, as well as Gabby Sidibe.

With a cast and story like that, American Horror Story: Coven almost seems too good to be true. Already the show has taken fans on a wild ride through a house with a horrific past and into the depths of a demented asylum. One can only speculate what kind of tales will be told within the story of a coven of modern-day witches led by what’s sure to be a terrible, wonderful and awesome Supreme (how can she be anything else when played by Lange?).

If the season description didn’t get you excited enough, check out the latest teaser video. If this doesn’t give you a shiver, perhaps nothing will.