Lamar Odom has returned home to Khloe after being off the radar for a while. There has been no divorce talk yet, and while the NBA player remains unsure about getting treatment for his alleged drug problem, he is receptive to seeking help.

Related story Khloé Kardashian Is Fed Up With Mom Shamers: 'I'm Not Going To Let My Child Choke' 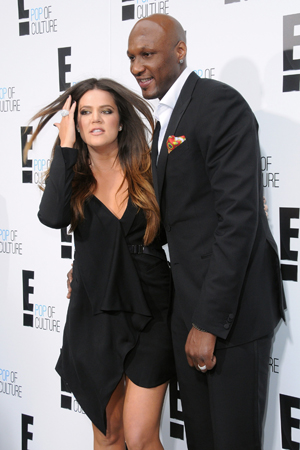 After a rumored separation due to Lamar Odom’s reported heavy drug use, the NBA player has returned home to his wife, Khloe Kardashian. However, the troubled basketballer is not sure whether he will seek drug treatment. The much-talked-about couple has also not spoken about divorce yet, and are supposedly trying to fix the relationship.

An insider close to the pair told TMZ that they are home dealing with their situation and talking about “some serious issues,” which include Lamar’s bad crack-cocaine problem. Khloe is very determined to help her husband get his life back together.

Apparently, Odom has done a 180 from his rejection to an attempted family intervention last week, and is now willing to listen “to the people who love him the most,” the source added. While he hasn’t made a decision on any possible treatment or rehab, Odom is being very receptive to his family’s suggestions.

TMZ actually caught up with Odom Monday night as he was getting some gas for his car near his home. The reserved athlete seemed to be in good spirits and he even took some time to pose with a young fan.

Meanwhile, Odom’s NBA friends have had no luck in trying to reach out to him, as he is just keeping to himself for now. This may be due to the fact that his drug use is adversely affecting his career with the NBA.

Several reports have alleged that the reason he was dropped from the Dallas Mavericks was because his drug problem was so severe, TMZ claims. Sources told the website the team paid him in full for the whole season, even though he left half-way through it “just so he would go away.”

Odom even admitted himself to smoking pot a few years ago when he failed an NBA drug test.

“I chose to experiment with marijuana, that’s why I’m here right now… I’ll be receiving counseling, that’s not rehab,” Odom said in a press conference back in 2001. While he supposedly cleaned himself up and remained drug-free for 10 years, his drug issues have now escalated as he is believed to be heavily into crack-cocaine.

Prior to the new reports that Odom has been struggling with a drug problem, rumor had it that he was cheating on Kardashian. The Huffington Post is now reporting that two women have come forward saying they both had affairs with Odom.

One of the women, lawyer Polina Polonsky, actually passed a lie detector test regarding her claims, Radaronline reported, and said she had a six-week affair with Odom. She hooked up with him on June 9 at the Roosevelt Hotel and had the impression Odom and and his wife were over.

“After we had sex, Lamar stayed the night with me; the next day we went back to the Roosevelt,” Polonsky told Radar, “I stayed there with him for the next couple of nights.”

The other woman claims she had a one-year affair with the athlete and that Kardashian actually knew about it.

However, right now, Kardashian is not focusing on her husband’s extramarital antics and just wants to help Odom get over his drug issues.