One Direction had a tough time at the MTV VMAs, but what has confused the boy band most is Taylor Swift’s reaction to her ex-boyfriend and One Directioner, Harry Styles. 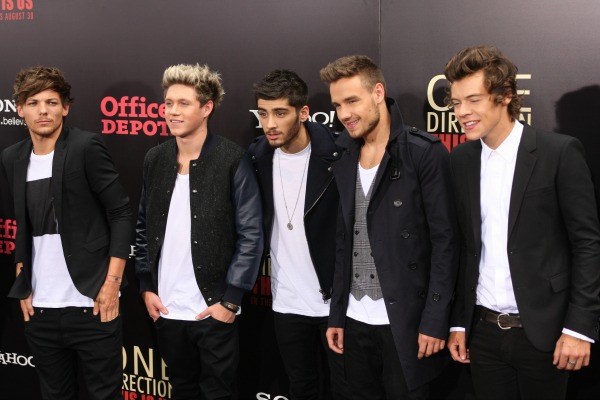 One Direction, the five-piece band made up of Louis Tomlinson, Niall Horan, Harry Styles, Liam Payne and Zayn Malik, arguably had a tough time at the MTV VMAs when they were booed on stage.

That is not, however, what has left the band feeling “a bit confused.” The reason for their confusion points to Taylor Swift’s behavior.

Swift appeared to mouth the words, ”Shut the f*** up,” as the band collected the Song of the Summer award before later dedicating her own Best Female Video trophy for “I Knew You Were Trouble” to her ex-boyfriend Styles.

When Swift dedicated her award to Styles he tried his best not to show any emotion while the camera panned over him to get his reaction.

Tomlinson had something to say about Swift’s behavior when he joked with Us Weekly, saying, “We were a bit confused. We thought she was actually calling out Niall [Horan] so the whole thing’s a bit confusing.”

Payne also decided to have some fun with the situation and jokingly told Vulture, “When she said those things about Niall [Horan], we were very, very pissed off,” before adding, “Hashtag get over it.”

We all know that Swift’s comment was in fact directed at Styles and One Direction came to the aid of their band mate. When asked on the red carpet of their New York premiere for This Is Us, Payne said, “I just thought it was a bit not needed. I mean, you just won an award, it’s like, concentrate on yourself.”

Payne was asked whether he felt Taylor’s reaction was ”lame” and he added, ”Yeah, we were a bit confused.”

Styles and Swift were later pictured together at Robin Thicke’s after party as part of a group, standing between mutual friend Ed Sheeran and another person.

We wonder if Swift is over her ex-boyfriend after all? Well, One Direction has decided not to focus on the negativity of that evening. The stars are looking forward to bigger and better things, for example their own TV show.

It has been reported that they could be close to inking a deal for a new prank program after Tomlinson became hooked on BBC Three’s Impractical Jokers and they now have their sights set on having a hidden camera series.

Tomlinson is quoted by the Daily Star newspaper as saying, “We want to do a TV prank show like that new one on BBC Three.”

“It was funny and full of practical jokes. We would like to do a show like that and prank celebrities,” he said.