Miley Cyrus still has some friends in showbiz who are willing to defend her recent behavior at the VMAs. 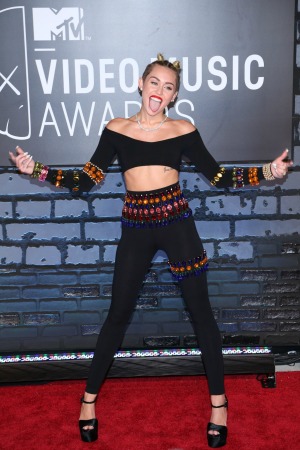 Miley Cyrus has been receiving a lot of criticism about her controversial MTV Video Music Awards routine alongside “Blurred Lines” singer Robin Thicke.

However, there are those who have defended and praised the singer over her act in a minuscule nude-colored bikini.

Justin Timberlake, who took home four awards at the ceremony on Sunday, has reported that his favorite part of the night was during Cyrus’ performance.

OK, maybe he was not praising Cyrus herself, because Timberlake found the most amusing part of the night to see the pure astonishment on the faces of Will Smith and his children, Jaden, 15, and 12-year-old Willow during Cyrus’ performance.

Speaking on New York radio station Fresh 102.7FM on Tuesday, Timberlake said, “My favorite part of the Miley Cyrus performance is the Smith family reaction. I was late to the game on that, I was just shown that this morning so it’s fresh in my mind. That’s my favorite part of the whole thing.”

However, Timberlake has insisted there was nothing wrong with Cyrus’ performance and that the VMAs are no stranger when it comes to controversial performances. Remember Madonna and Britney Spears’ 2003 VMAs performance when they infamously kissed during a rendition of “Like a Virgin?”

Timberlake added, “Listen, man, it’s the VMAs — what did you guys expect? I like Miley. I like her a lot. I think she’s young, she’s letting everybody know she’s growing up. I think it’s the VMAs, it’s not like she did it at the Grammys.”

“It’s the VMAs, let her do her thing. You know, Madonna. Wedding suit. Humping the stage. Britney. Striptease. This is not an uncommon thing.”

“I actually thought all the bears were really cool.”

Timberlake is not the only celebrity to come to Cyrus’ side. Adam Lambert has also defended the young star.

The former American Idol runner-up slammed Cyrus’ critics and aired his views on Twitter, writing, “And listen if it wasn’t ur cup of tea— all good but why is everyone spazzing? Hey – she’s doin something right. We all talkin. (sic)”

Lambert tweeted, “Hold up! I didn’t actually state whether or not I liked @MileyCyrus performance. I merely said she was having fun and to cut her some slack.”

“Whew folks are all heated bout this. Hilarious. I can’t help it that I’m a contrarian — just another healthy debate. (sic)”

You’ll remember Kelly Clarkson made a cryptic tweet that we suspect was directed at Cyrus and her risqué performance? That tweet triggered a response from Cyrus’ friend, Cheyne Thomas.

Thomas tweeted, “Kelly Clarkson called Miley a pitchy stripper. Do you think she’s mad because her past few singles flopped and wasn’t asked to perform? and she’s fat and 30 … the reasons Kelly Clarkson is bitter could really go on for day (sic).”