Madonna is the reigning queen of pop. Her latest tour was so successful it secured her the top spot as the highest-earning celebrity of 2013. 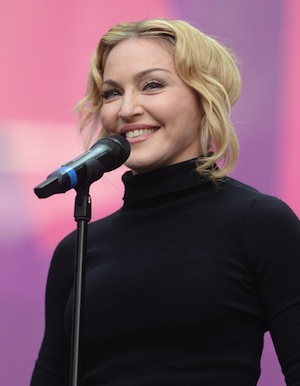 According to Forbes, the MDNA tour grossed $305 million. Everyone knows artists earn most of their money on the road. Therefore, Madonna really cashed in. She also had several product endorsements, a clothing line, a fragrance collection and other business investments. Between June 2012 and June 2013 she raked in $125 million making her the top-earning celebrity of the year.

Madge beat out Steven Spielberg, who came in second with $100 million. The director and producer earned a chunk of his pay through television projects via DreamWorks. We also can’t forget the success of last year’s Lincoln, which was applauded by critics and audiences alike. The film was made for $65 million and grossed $275 million worldwide. That’s a major profit.

For the third spot, Forbes noted a three-peat. Fifty Shades of Grey author E.L. James, media personality Howard Stern and TV producer/judge Simon Cowell all came in at number three. They each pulled in $95 million each. That’s an exclusive club we wouldn’t mind being a part of.

Check out the list of Forbes‘ Top-earning celebrities below: