Did you know that Vin Diesel has a family? Many of his fans might be surprised to learn that he has two kids with his girlfriend. 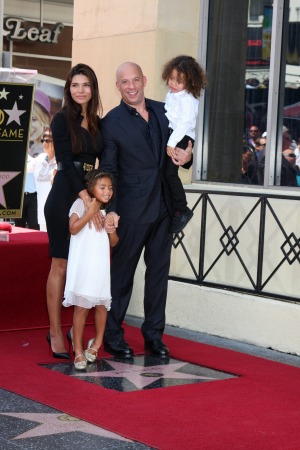 Moviegoing audiences know Vin Diesel as a tough, muscular action hero. At home, though, he’s just known as dad. On Monday, the actor made a rare appearance with his entire family while receiving his star on the Hollywood Walk of Fame.

The star was flanked by his girlfriend, Paloma Jimenez, and their two kids, daughter Hania Riley, 5, and son Vincent, 3. The Fast & Furious 6 star has been so private about his personal life, he’s never officially announced their births.

Vin Diesel gets tree-like for Guardians of the Galaxy >>

He told Good Morning America, “I didn’t want cameras around this event. I wanted this to be as natural as possible.”

The protective dad hasn’t had to deal with the paparazzi the way Halle Berry and Jennifer Garner have because he just didn’t discuss them in the press. That has all changed with the family’s cameo on The Tonight Show in May and now, the public star unveiling.

According to omg! Yahoo, the action star cuddled with his daughter in his arms as they both gave a big thumbs-up at the ceremony. However, his son may be the one following in his father’s footsteps. Vincent hammed it up for the crowd with an adorable smile.

Fans shouldn’t be surprised at what a gentle giant Diesel is beneath his tough exterior. On Valentine’s Day, he posted a YouTube video for Jimenez. The clip showed Diesel singing Rihanna’s song “Stay” for his love.

Don’t get too used to the sweetness though, the actor will next be seen in another action role. Riddick hits the big screen on Friday.