This had better not be a joke or another Mona moment because this reveal is the biggest yet! A’s identity has been uncovered. For real this time. We think. 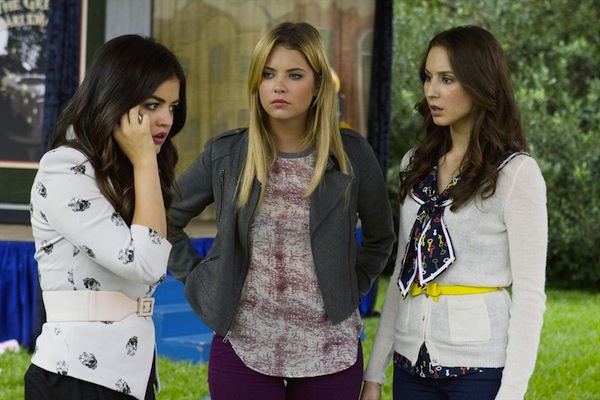 Yes! I could jump up and down with joy or maybe cry or both. Either way, it’s the moment we have all been waiting for. We have answers, and the show has our attention! For four seasons now, we have been balking over the mysteries, and we hope Pretty Little Liars hasn’t been messing around with this one because it’s big — huge! Do not continue reading unless you are ready for some major spoilers (aka the true identity of A).

The charges are officially dropped in Ashley’s case after Travis tells the police what he knows about the night Wilden died. Now the threats from A begin. She sends them all a text: “If she goes free, you’ll hear from me, kisses, A.”

Ashley goes out to celebrate with Pastor Ted. Once she leaves, the girls get a package from A. It’s a kid’s coffin with a doll of Mona inside. They get a text that says, “Hanna won, so Mona loses. Find her before the cops or they’ll think you killed her. — A”

The girls called Radley and discover Mona is no longer a patient. It’s a race against time to find Mona and CeCe, who they think is holding her.

The girls don’t have any luck tracking Mona down, and they all lean on their respective relationships to comfort them in the scary time. Aria (Lucy Hale) calls Jake over for a poetry night, but he isn’t interested so they watch an old movie instead. He falls asleep, and Aria is feeling like they don’t have much in common. Again.

She heads to the coffee shop after her date and runs into Ezra. He was at the poetry reading Aria wanted to go to with Jake. Ezra remembers a poem Aria wrote a long time ago, and she gets all googly-eyed. She ends up kissing him and red coat sees her. Uh-oh.

Another box arrives, which leads the girls to a magic show in Ravenswood.

Side note, what is it with the Instagram effect whenever anyone goes to Ravenswood? I don’t get it. Maybe the new spinoff show will shed some light?

During the magic show, Emily (Shay Mitchell) goes missing. The girls call Emily, only to discover she’s locked inside a coffin. They find her just in time to save her from a saw mill’s blade.

As they free Emily, the girls catch sight of two red coats. Wait, there are two of them? 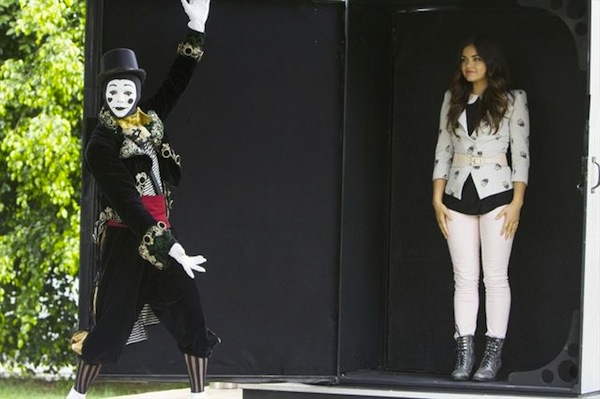 Spencer (Troian Bellisario) runs after one.

Aria takes the other and gets in a major girl fight. She kicks off the mask, revealing CeCe who loses her balance and falls from the railing. Aria barely catches her. The sleeve of CeCe’s coat rips, and she falls to the ground. Dead.

The girls console Aria, but when they look back over at the body, CeCe has disappeared.

Spencer thinks her red coat was Ali and shows the girls where the girl led her. It’s a room full of pictures of Ali. It also has a timeline of each of the girls and all their secrets. There are even multiple computers with monitoring systems. The girls think they’ve found A’s lair.

Meanwhile, Toby sees Shana’s blue mustang drive from Mona’s house and follows her to another house where he discovers Mona hiding out. She’s alive and well. Shana hands her a letter, and Mona asks if “she’ll be OK with this.” Shana replies, “She doesn’t have a choice.”

Back in Ravenswood, the girls look through A’s computer and ask Caleb to help. He plans on traveling to Ravenswood by bus to help the girls. Caleb gets on a rusty old bus. It seems suspicious and really out of date.

Spencer finds a bank account and information that leads them to believe A formed a corporation. There were two payments made to CeCe last week.

They find a closet full of black suits. Hanna (Ashley Benson) suggests A is a guy.

Then they find a photo album full of pictures of Ali. Hanna remembers the shirt Ali wears in the picture. She says Ali bought it for a date she had with an older man. A clearly isn’t Wren, though, because Wren is on the timeline boards just like the girls.

Aria finds Ali’s timeline, and they think A has been following Ali’s trail to Ravenswood. Based on the boards, the girls think Ali’s alive. They find information about a party being held that night, and think Ali will be there.

The girls plan on attending, but are interrupted by Mrs. Grunwald. She tells them it’s dangerous to, “go chasing after her.”

Mrs. Grunwald does know Ali, and lied to Spencer to protect her. Ali had been calling Mrs. Grunwald at the sorority house to find information about the person following her. Mrs. Grunwald says Ali was afraid, and she had a right to be. Mrs. Grunwald has the gift of insight. After all these seasons, here comes the big supernatural reveal?

The night Ali went missing, Mrs. Grunwald felt something terrible. She drove to Rosewood on instinct, walked into Ali’s backyard and found Ali was reaching for life through the dirt. Mrs. Grunwald pulled her from the ground. Ali’s head was bloody and she was confused. Mrs. Grunwald put Ali in the car and drove her to the hospital. Mrs. Grunwald ran in to get help but when she returned, Ali was gone.

Ali is alive, though Mrs. Grunwald hasn’t seen her since that night. Mrs. Grunwald says Ali won’t reveal herself until she finds out who she can trust. Hanna says Ali can trust them, but Mrs. Grunwald says she wouldn’t be so sure. She wants the girls to leave Ravenswood. They’re being watched and, “he’s hoping you’ll lead him to Alison.” She says, “He’s here,” and walks away.

The girls don’t know whether they should trust Mrs. Grunwald or not. They still make plans to crash the party.

A man in a black coat is watching them. He goes back to the lair. It’s Ezra, and he’s angry. Cue the mouth dropping and the silent scream. That’s right. Ezra is A. I repeat, Ezra is A!

And now we have a long stretch of painful months to wait for more.