Another day, another run-in between Alec Baldwin and the paparazzi on the streets of New York. The actor was being protective of his wife, who just gave birth. 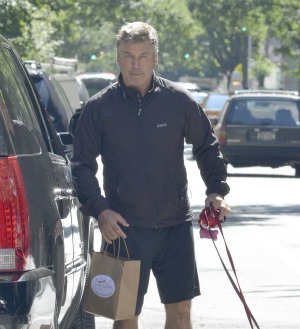 It’s no secret that Alec Baldwin and the paparazzi really hate each other. The photographers taunt the actor and he dishes it right back. So it was no surprise when Baldwin and a New York shutterbug were involved in an altercation on Tuesday.

TMZ has the photos of the 30 Rock star gesturing with his hand to block the camera’s lens.

The photographer told the gossip site, “All I can say is I was doing my job, asking him normal questions, and he flipped. That’s all.”

Alec Baldwin may be heading to MSNBC >>

However, a source told ABC News, “The photographer was the aggressor. He even chased Alec’s wife [Hilaria] into a store after the incident.”

It’s understandable that Baldwin would be even more protective than usual given the fact that his wife Hilaria just gave birth to their daughter Carmen Gabriela last Friday.

It was the photographer, though, who called the police, and the NYPD showed up to hear the two men out. After a bit of discussion, both parties admitted to getting physical during the argument. Since they both accepted some responsibility in the situation, Baldwin and the paparazzo called a truce.

A friend of Baldwin’s told TMZ that Hilaria was a bit spooked by the whole event.

The insider vented, “What kind of sick twisted psychopath chases a woman who just got out of the hospital from having a baby into a tea store?”

The good thing is that no one was hurt and the 55-year-old actor had enough sense to walk away from a heated situation once the cops were on the scene.

However, it might be Baldwin’s 17-year-old daughter with his ex-wife Kim Basinger who has the most common sense.

Ireland wrote to her new baby sister on Tumblr, “You have been born into one crazy family. You are both lucky and cursed at the same time.”