Robin Thicke just released his new video for “Give It 2 U” and it looks kind of familiar. 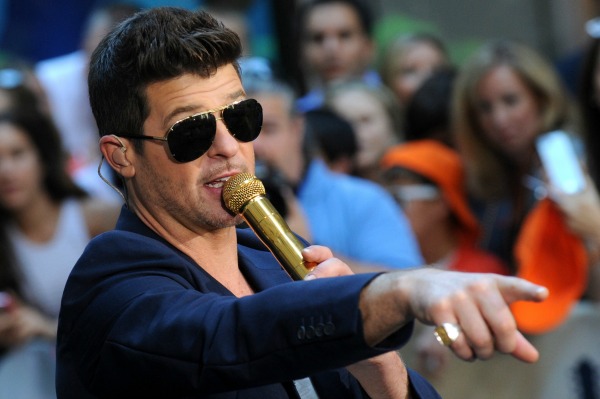 Robin Thicke isn’t letting a little thing like a looming lawsuit get him down. The R&B star just released a new video and it has some distinct similarities to his notorious VMAs performance with Miley Cyrus.

Thicke is fresh off his extremely controversial act with the former Disney star which featured lots of twerking and simulated sex with a big foam finger. Guess what this new video features? Hint: Everything but Miley.

In fact, even Thicke’s toddler son Julian makes an appearance. We’ll leave you to decide if that’s wildly inappropriate.

Watch Robin Thicke’s NSFW video for “Give It 2 U”

The current uproar about his VMAs performance and the release of the new video might take Thicke’s mind off the war he started with the family of Marvin Gaye, who accused the star of ripping off the late R&B legend’s song “Got To Give It Up” on “Blurred Lines.”

According to Billboard, the Gaye family refused a settlement offer from Thicke designed to preempt a copyright infringement lawsuit. Now Thicke has filed a suit of his own, asking a judge to declare his work is completely original.

“We’re not happy with the way that he went about doing business let alone suing us for something where he clearly got his inspiration from at the least,” Marvin Gaye III told TMZ.

And in fact, Thicke himself admitted at least that much in an interview with GQ last May, saying, “…one of my favorite songs of all time was Marvin Gaye’s ‘Got to Give It Up.’ I was like, ‘Damn, we should make something like that, something with that groove.’ Then he started playing a little something and we literally wrote the song in about a half hour and recorded it. The whole thing was done in a couple hours.”

However, in his lawsuit Thicke claims the “intent in producing ‘Blurred Lines’ was to evoke an era. In reality, the Gaye defendants are claiming ownership of an entire genre… The reality is that the songs themselves are starkly different.”

So far no shots have been fired over his new single.