The first clip from the upcoming fourth season of The Walking Dead shows Michonne in trouble… and on a horse? 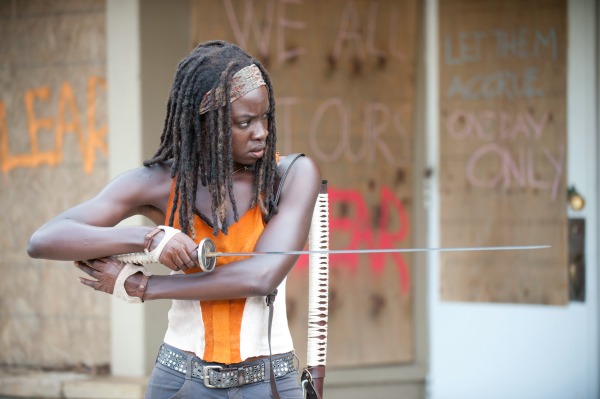 With the fourth season of The Walking Dead getting closer by the day, fans are eager for any tidbits they can get about what will happen to the survivors.

AMC has released a new video that sheds a few shafts of light on the new season, but very few. The clip is only about 40 seconds long, but in those short seconds still manages to convey a whole lot of danger for one of the main characters on the show.

The sneak peek clip shows Michonne riding in from what we can only assume was some sort of patrol. What exactly she was doing on patrol isn’t clear, but it’s doubtful that it was to gather any sort of supplies as her hands and her saddle bags look pretty empty. Though, it could be that whatever she was sent out for wasn’t very large and could still be on her.

The Season 4 trailer released at Comic-Con already revealed that Michonne would be riding a horse, and she seems to have mastered her equestrian skills in the video. One thing that can’t be determined yet is whether or not Michonne’s steed is the only horse the group has, or if they’ve all turned to horseback as another mode of transportation. Logic would dictate that many horses would’ve been attacked by walkers (who can forget Rick’s poor horse in the pilot?), but it’s possible that they found a herd of horses let loose by their owners that have been hiding deep in the woods somewhere.

Another thing learned from the video is that some extra reinforcements appear to have been put up near the gates, but even with the extras, the danger is still there and as soon as Michonne dismounts she’s surrounded by hungry walkers. She quickly finds herself fighting off two at once as other members of the group rush to her rescue.

This Walking Dead video will make your day >>

Whew! How is it possible that this show can get one’s blood pumping with such a short clip? Will Michonne escape the walkers? It’s doubtful she would go down like that, but fans will have to wait until the show comes back to know for sure.