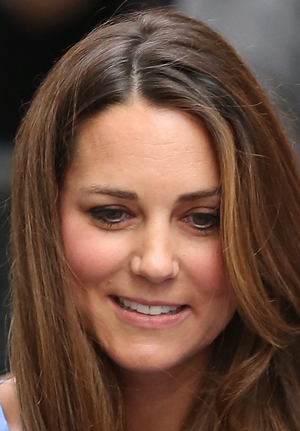 Showing no baby weight whatsoever, Kate Middleton stepped out to go shopping in Anglesey, Wales, on Monday, Aug. 26, looking just as she did before she was pregnant, Us Weekly reported.

Middleton wore black skinny jeans paired with a striped boatneck shirt and appeared to be in great shape.

On the day she left the hospital after the birth of her son, Middleton still had a bit of a baby belly; however, that quickly went down and her stomach is now completely flat.

“She’s hardly done anything to lose the weight… She looks incredible,” a source told Us Weekly. “Kate’s still breastfeeding and the small weight she gained while pregnant has just melted off.”

Apparently, Middleton does a lot of yoga and she continued practicing even shortly after she gave birth. Of course, she’s blessed with a very thin frame and was quite skinny pre-pregnancy, but she’s proof that losing the baby weight right after having a baby is very possible.

No doubt, the Duchess of Cambridge has plenty of help with her new little bundle, so she has more time to exercise, unlike regular busy moms. But she’s still a good inspiration for moms who want to slim down after having a baby.

The royal family is currently residing in Anglesey while their luxury Kensington Palace 20-room apartment is being renovated. They will move in sometime in September.

Meanwhile, Prince William recently said in an interview with CNN that the little prince is growing a lot, but is a “bit of a rascal,” when it comes to sleep.

“He doesn’t want to go to sleep that much, which is a bit of a problem,” Prince William told CNN’s Max Foster. “So he either reminds me of my brother or me when I was younger. I’m not sure. But he’s doing very well at the moment.”