Think Miley Cyrus has a lock on making the world cringe and cover its eyes? Not by a long shot. See some other MTV Video Music Awards performances that shocked us all, including a couple by her fellow Disney princesses. 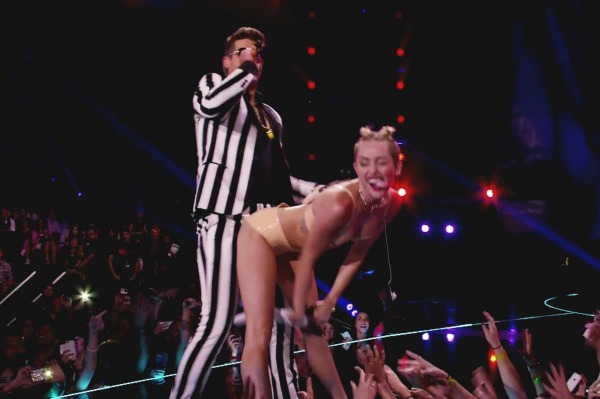 The country is totally up in arms about Miley Cyrus’ sex and drug-fueled performance at the MTV Video Music Awards Sunday night, but the public apparently has a short memory. Cyrus is hardly the most scandalous performer to grace the VMAs stage. Here are six other acts that made your mom threaten to cancel the cable.

Parents react to Miley Cyrus at the VMAs with horror >>

Nearly 30 years ago, Madonna made her VMAs world debut in a lacy white corset, writhing around on the stage while singing her saucy song “Like a Virgin.” Though the performance is tame by today’s standards, at the time it was extremely risqué.

Britney Spears “Satisfaction/Oops!… I Did It Again” 2000

Back before Britney shaved her head and was put under a 5150, she was the brightest star on the pop scene — and the sexiest. In her 2000 VMAs performance when she was just 19 years old, Brit stripped off her suit revealing little but a sparkly, see-through bra and what can barely be called pants and proceeded to bump and grind all over the stage. Can you spy the precursor to twerking in there, too?

OK, so this is from the MTV Movie Awards, not the VMAs, but it still falls under the umbrella of raunchy. The four women are literally playing the roles of prostitutes trying to lure in business while wearing trashy lingerie that would make the most hard-core Frederick’s of Hollywood customer blush.

The most shocking moments from the 2013 MTV VMAs >>

The only reason Lady Gaga’s costume is covering more skin than Cyrus’ is that added puff sleeve. Her bottoms are certainly smaller. While there wasn’t any overtly sexual imagery in this performance, she does get stabbed to death and hanged, which we think you’ll agree is worse.

While sadly no video is available to share in the U.S., trust us when we say Prince’s outfit was way more revealing than Cyrus’. His canary yellow jumpsuit literally had no backside. His little brown butt cheeks were bouncing around out there the entire time he performed the extremely sexual number, surrounded by near-naked male dancers wearing nothing but Speedos.

Tell us: Was Miley Cyrus’ performance better or worse than these?

40 mins ago
by Daisy Maldonado