Things seem to be going downhill quickly for Khloé Kardashian and her husband, Lamar Odom. New reports claim the couple have separated over Odom’s drug use. 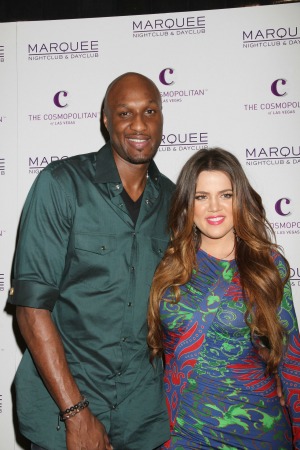 The story about Khloé Kardashian and Lamar Odom‘s marriage falling apart has been on a slow burn all summer long. However, reports are flying fast and furious not only about his drug use, but the current state of their marriage.

According to TMZ, the couple have separated, but neither one has moved towards filing for divorce. This comes after an alleged intervention that went south last Wednesday. Kardashian reportedly confronted Odom about his drug use with members of her family.

When he refused to acknowledge his addiction, the gossip site claims she threw him out of the their Tarzana, California home.

There are mixed reports of what drugs the NBA player is abusing, but everything from crack cocaine to an addiction to prescription pills like Oxycontin have been bandied about. The free agent comes from a family where drug addiction has been an issue in the past. His father struggled with a heroin problem for years.

The estranged couple did sign a post-nuptial agreement after their 2009 wedding. Rumor has it that Kris Jenner worked hard to make sure her daughter was protected because their courtship lasted a mere 4 weeks.

There has been no word from Odom’s camp about the allegations, but with the NBA pre-season beginning soon, it spells trouble for the athlete. The Los Angeles Clippers were planning on signing the 33-year-old to a one-year contract. It will be interesting to see how the reports affect his athletic career.

Kardashian has responded on Twitter venting her frustration at all of the media reports.

She wrote, “Really hard to sit here and listen to people talk s**t about my family! F**k you and shame on you! I’m too protective for this s**t!”

Clearly the reality star is going through a lot, especially since her husband’s drug problem reportedly has been an ongoing problem for the last two years.

This may be one problem that Mama Jenner cannot fix.