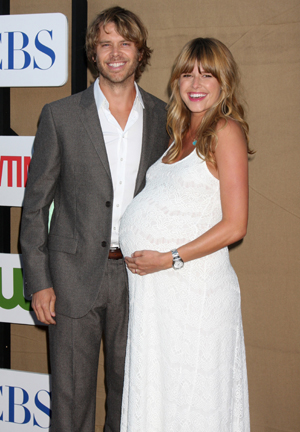 Speaking with People magazine, the happy couple said their new son was born on Friday, Aug. 16, and named him Wyatt Oliver. Olsen also told the magazine that the experience of becoming a new father has been incredible.

“I’ve never been a part of something so surreal, so life affirming and so insanely beautiful as watching my son come into this world,” Olsen told the magazine, “It was this watershed moment where I knew that everything I valued before seems finite and temporary.”

The proud and devoted father, who plays Detective Marty Deeks on the hit CBS drama, added that 21 and Over star Wright, went through 17 hours of labor as part of a natural home birth. He also marveled at the strength of his wife and how lucky he feels to have such “an amazing, powerful woman” in his life as well a “beautiful new son.”

Wright, who guest stars in NBC’s Parks and Recreation, married Olsen in June 2012 at their Jackson Hole, Wyoming ranch.

Before marrying Wright and landing his gig on NCIS, Olsen had various small roles and was the lead in the short-lived Fox TV series Get Real. Soon after, he scored a role playing Ben Affleck’s gunner in the blockbuster hit Pearl Harbor, and then a leading role in the teen hit Not Another Teen Movie.

While he starred in various high school plays and even did a few commercials at the beginning of his career, Olsen was a pre-med student at Pepperdine University.

He remained single up until he married Wright, a former model, who was herself previously married to A.J. Mason for just a year. Olsen and Wright dated for five years and had an eight-month-long engagement before tying the knot.

The couple initially met in 2006 and got engaged in Punta Mita, Mexico. Their wedding included guests from Olsen’s NCIS: Los Angeles as well as family and friends.