Macklemore’s song “Same Love” is helping to spread a positive message about gay rights across the music industry, and the artist won Best Video With a Social Message at Sunday’s MTV VMAs. He also had a few friends to help him. 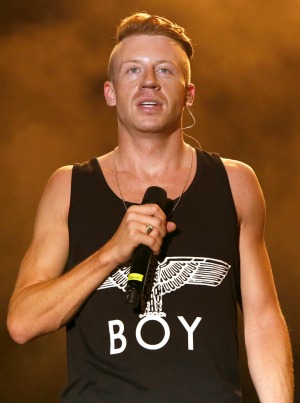 Macklemore’s song “Same Love” is about sharing the message of gay rights, and it won the award for Best Video With a Social Message at Sunday night’s MTV Video Music Awards. Macklemore appeared on stage to accept the award and spoke about why he felt the song was so important.

“‘Same Love’ has turned into a song that has been embraced by the mainstream and that was played by the radio,” Macklemore told MTV News Saturday night. “There is a lot more people that are familiar with it now than six months ago and the timing is perfect. It’s a powerful record and it needs to be heard in America right now. And equality is at the forefront of what’s going on in politics right now.”

Macklemore is proud of all of his music, but he appears to be especially proud of this song because of its message.

10 Things you don’t know about Macklemore >>

“It’s a song that I wanted to write because I felt like it wasn’t being addressed within hip-hop music,” he said. “And I think that the homophobia was still very rampant within hip-hop culture.”

During the awards show Sunday night, Macklemore emphasized this point, saying that gay rights are the same thing as human rights.

“The performance is going to be hopefully memorable,” Macklemore told MTV. “Hopefully we will be in the present moment. We will capture some magic on the stage that will be transmitted to the televisions of the world.”

Jennifer Hudson surprised everyone by joining Mary Lambert on stage to help with the female vocals.

The world of Twitter was generally excited about the performance and about Collins’ and Hudson’s surprise appearances.