You’ve never seen a football halftime show like the one Robin Thicke gives to us in his new video, “Give It 2 U.” 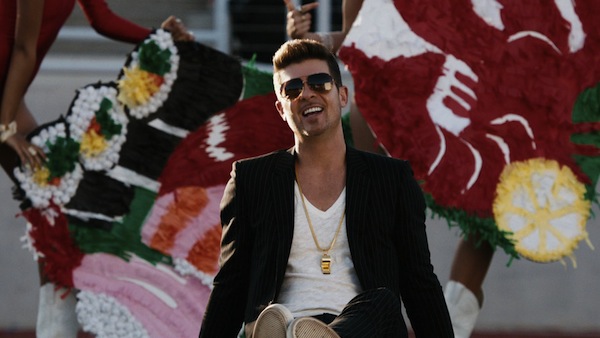 His videos are notoriously sexy.

He had topless ladies parading around in front of him in his “Blurred Lines” video. And then there was the infamous MTV VMA performance.

So in his new single, “Give It 2 U” featuring 2 Chainz and Kendrick Lamar, I don’t think there is any question about what “it” means.

But in case you are a bit blurry, Thicke lets you know within 10 seconds about “it” and “it’s” size (for the record, big).

Instead of going to the bedroom for this video, Robin decided to take us to the most insane pep rally we’ve ever seen.

And what’s a pep rally without some cheerleaders — specifically, at the suggestion of Thicke’s wife Paula Patton, three black college dance teams: the Alabama State University Stingettes, The Jacksonvile Prancing J-Settes and the Passionettes from Albany State University.

Unlike his previous videos where we only get to see Thicke in a black suit with a white shirt, in “GI2U,” he switches it up. The black suit is there, yes, but this time, Thicke is the one topless before changing into his referee attire aka the Betelgeuse suit.

Joining Thicke at center field is his son, Julian Fuego, who shows off his stellar dance moves in a black suit. Considering Thicke mostly stands around and makes cute puppy-dog faces, Julian must get the dance moves from Patton.

And we’re not even halfway done.

There’s a cotton candy mascot, aka a hot girl in a white leotard with cotton candy bags stuck all over her. And, of course, Mr. Thicke pulls a piece off and eats it.

The luxury girls prance around dressed up like floats representing champagne, sushi, lobster and a candelabrum. Evidently Liberace came up with that idea.

And all of this is before the appearance of the a** float, which is pretty much what you’d expect it to be. Only the best for 2 Chainz.

By the way, Miley. You need to take note. That is how you twerk.

And the best part is, the whole thing was free… at least it was probably free due to all of the product placement for Mini, Beats Pill and Remy Martin.

“Blurred Lines” director Diane Martel is back and cooked up the video for “GI2U.” As she told MTV News, Thicke couldn’t have been happier.

“The thing about Diane Martel that makes it so amazing — besides just being a crazy genius — is that she combines all different parts of the world into one soup,” he said. “She takes the cotton candy, she takes the beautiful football-playing girls and she mixes it all up into one beautiful pot. So we’re all very lucky to have her and excited to be working with her again.”

Ten music videos that may be too racy for your teen >>

Clearly, this is Thicke’s time to have fun. It’s all goofy fun and toungue-in-cheek, as you can see from the closing credits where Thicke names himself as the Producer, Editor, DP (Director of Photography), Hair & Make-up, Costume and Art Department.

Check out Thicke’s work in his new video “Give It 2 U” and let us know what you think in the comments below.