Miles Teller could be joining a league of superheroes. The actor’s rumored to be starring in Fox’s new and improved Fantastic Four. 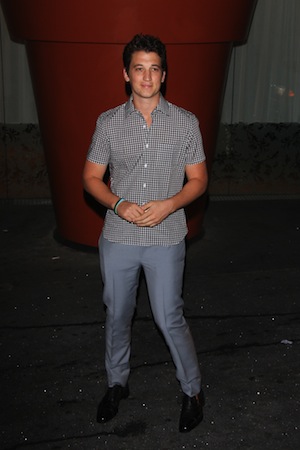 For the past few years, 20th Century Fox has been working on a Fantastic Four reboot. The superhero team last appeared in the 2007 sequel Rise of the Silver Surfer. At the time, the cast included Jessica Alba as Sue Storm, Chris Evans as Johnny Storm, Ioan Gruffudd as Reed Richards and Michael Chiklis as Ben Grimm.

These days, the studio is looking to revamp the lineup. It may avoid the traditional route and hire much younger actors. For example, Richards (aka Mr. Fantastic) is typically portrayed as an older man with black and gray hair, so their rumored casting choice breaks that mold.

The latest casting rumors have 26-year-old Miles Teller in the running for the part. MTV recently caught up with the actor, who addressed the speculation.

“I have no idea,” Teller said. “I think at some point you just have to play a superhero. That’s the world we’re living in right now. I mean, they’re getting snatched up left and right.”

He continued, “I would love to be in Fantastic Four. That would be something I would be very proud to be a part of and happy to do. As far as this whole rumor thing, I don’t know. I’m at an age right now where you can start a superhero because I can play him for the next ten years.”

Teller currently stars in the coming-of-age drama The Spectacular Now. He previously appeared in Footloose and 21 & Over.

Who do you think should play the new Reed Richards?