Olivia Wilde is more than just a pretty face. She’s a great actress, and she’s smart and incredibly funny. She’s also engaged to Jason Sudeikis, so she knows a thing or two about dating. 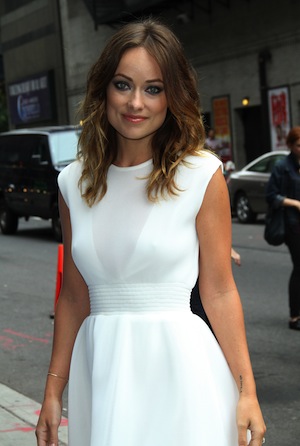 Olivia Wilde is a talented actress who currently stars in the indie comedy Drinking Buddies. In the film, she plays a less-than-glamorous character called Kate. There’s no makeup or stylish wardrobe for her to hide behind — it’s just Wilde and her words.

Despite her low-key appearance, guys still find Wilde to be strikingly beautiful. That tells you something, doesn’t it?

Olivia Wilde was once scared of love >>

“I think we can take that as a lesson because what they are responding to is her confidence and her vibe,” Wilde revealed. “I think I had [about] 1,000 breakouts because it was hot and sweaty in Chicago and we drank beer. I think it was a little concealer, and I tried to wash my hair once in a while.”

So it’s not about how you look but how you act. Aside from their appearance, Wilde and Kate have a few more things in common.

“I see Kate as a version of me that I could have become if things had gone differently in my life,” she said. “She makes the same dumb jokes that I make, but she is just a little more reckless than I am… Kate is a fun person — she’s living life, she’s grabbing it by the balls, but she’s personally not fulfilling herself.”

You can catch Wilde and her no-holds-barred performance in Drinking Buddies, which is currently in theaters and on video on demand.