Oprah Winfrey has a reason to smile. Her latest film, Lee Daniels’ The Butler, debuted as the No. 1 movie in America. So how did she celebrate her box office triumph? 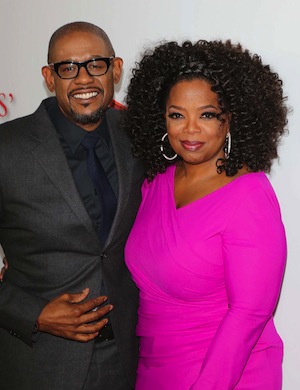 Oprah Winfrey is one of the biggest stars to appear in Lee Daniels’ The Butler. In the film, she plays the wife of Forest Whitaker’s title character. Together, they survive racial injustice, war and infidelities. It’s a powerful drama that charts U.S. history from a specific point of view.

The Butler opened in theaters last weekend, earning $25 million. It was the top-grossing film, beating the superhero sequel Kick-Ass 2 and Ashton Kutcher‘s Steve Jobs biopic, Jobs. It was music to Winfrey’s ears. She hadn’t been at the forefront of a feature film since 1998’s Beloved. That was another project she did out of passion for the subject, but it unfortunately fell flat with audiences.

10 Interesting things to know about Lee Daniels’ The Butler >>

When the numbers rolled in for The Butler, Winfrey celebrated. According to Access Hollywood, instead of breaking out the champagne, she rolled out a Hula-Hoop.

“I actually got a purple hula hoop that I bring out for occasions like this,” Winfrey revealed. “So I brought out that hula hoop in the front yard.”

Battle of the flicks: Lee Daniels’ The Butler vs. Kick-Ass 2 >>

After the positive reception from both fans and critics, Winfrey’s optimistic.

“I actually think this weekend is going to do better than we imagine,” she said. “It’s touching the hearts of people who didn’t expect it.”

Winfrey and director Lee Daniels previously collaborated on 2009’s Precious. Winfrey served as its executive producer. That film went on to score six Oscar nominations and two wins. Let’s hope The Butler has the same luck.