In an interview this week, actor Ian Somerhalder — who plays Damon on The CW hit The Vampire Diaries — spoke openly about his hesitation to accept a role in the new spinoff show, The Originals. 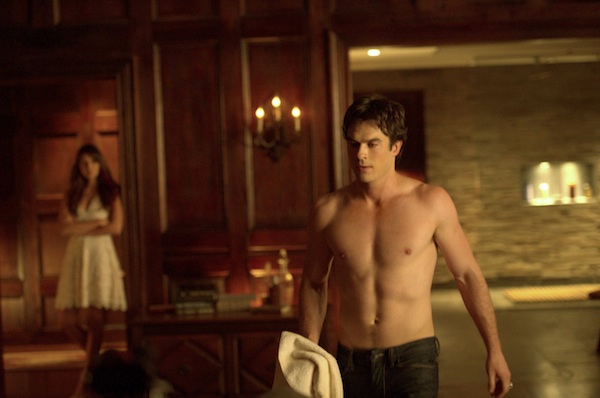 Ian Somerhalder isn’t holding back his opinion of the new CW spinoff, The Originals. In an interview this week with Digital Spy, Somerhalder confessed that the new show has him fearful because “They’re going to be taking these characters that mean so much to our show.”

We can’t blame him for that! We’re a little nervous, too. But we also can’t wait to see the new storyline.

Joseph Morgan, who plays Klaus, will be leaving The Vampire Diaries to head up the cast of The Originals — which is also set to star Claire Holt as Rebekah and Daniel Gillies as Elijah. Both also had integral roles last season on The Vampire Diaries.

The Originals will follow Klaus’ character as he navigates the New Orleans vampire scene and deals with an unexpected bundle of joy. All of our favorite original vampires will be central to the cast — along with some other colorful characters like Marcel, who runs the New Orleans vampire scene, and Hayley, a werewolf who is pregnant with Klaus’ child.

“I’m excited for [executive producer] Julie [Plec], and for Joseph and all my people, but I’m a selfish actor,” Somerhalder said, “I’m not a producer on the show, I’m not a writer. My only concern is Damon, and my show. I’m insanely happy for everyone, but I’m not thrilled.”

Somerhalder also went on to say he doesn’t know how or if the show can replace these characters.

“Who are the other people who are gonna be coming on the show? Are they gonna be good? Because it’s The CW and everyone has to be pretty, and there aren’t a lot of pretty people that can act well. I’m not joking!” Somerhalder said, “I’m one of them that can act well. Not to sound s****y about it, but casting is always tough.”

Oh, the turmoils of being one of the most good-looking men in Hollywood. Poor Ian Somerhalder! And those snarky comments just seem to make him even more attractive. What can we say? We like a man who speaks his mind.

We’ll still be tuning in to The Originals, which premieres right after The Vampire Diaries, on Oct. 3.

The Vampire Diaries & The Originals face off. Will you watch both?