The Real Housewives of Beverly Hills star is about to be a wife again! She’s engaged to lawyer John Bluher. 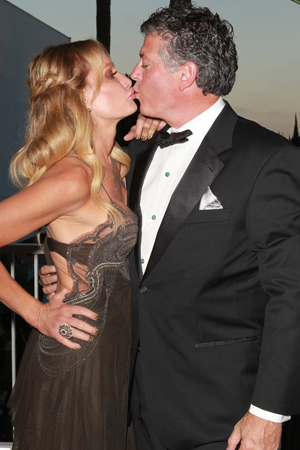 Taylor Armstrong is going to be a married woman again! Lawyer John Bluher confirmed that he popped the big question to his reality-star love at the St. Regis Punta Mita Resort in Mexico.

“Taylor was wearing a beautiful blue silk dress with an intricate metal collar and John was wearing linen slacks and a white linen shirt,” Bluher said in a statement.

Is Taylor Armstrong getting the boot from Bravo? >>

He continued, “The special engagement took place on the beach, just steps away from their ocean front suite… Candles lined the path from their room to the beach, where John had a huge white tent filled with white roses and lilies and from the center hung a dazzling chandelier, the sides opened up to a stunning view of the ocean and breathtaking sunset.

“The St. Regis Punta Mita Resort is where we fell in love, it was the perfect choice for this wonderful occasion” Bluher added. “Taylor was beautiful and never stopped smiling! It was an amazing evening, a ten all round.”

The engagement comes two years after Armstrong’s estranged husband, Russell Armstrong, killed himself. The pair had a tumultuous relationship — to put it lightly — and Armstrong credits Bravo and the Real Housewives of Beverly Hills cameras for keeping her alive amid his escalating abuse.

“If cameras were not in my life, there’s a good chance I wouldn’t be sitting here today,” she told KTLA-TV in October 2011. “I believe that, subconsciously, I may have signed up for the show to try and allow my problems to be in the public eye to some extent because, again, it was my saving grace,” she said.

“A lot of domestic violence situations end in murder-suicide, versus just suicide. I have my daughter with me today, and by the grace of God and, perhaps, reality TV, I’m sitting here and so is she,” she added.

And it allowed her to meet Bluher.

“I am so much happier than I have ever been,” she told E! News in February. “I never thought I would feel this way. He is a beautiful man. I didn’t think I would ever be able to trust someone completely. But somehow, he opened my heart and I let him in.”

Hopefully this new marriage will be the happy ending she deserves!