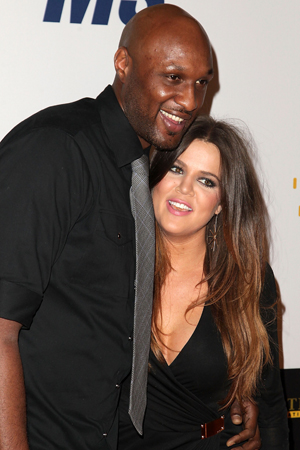 It might not be Lamar Odom’s roving eye that will end his nearly four-year marriage to Khloé Kardashian. According to TMZ, the basketball player is a “hardcore drug abuser,” and it’s putting their relationship in jeopardy.

Sources told the gossip website that Odom has battled drug addiction for two years. It eventually got so bad that Kardashian forced him into a rehab center and posted guards outside the entrance to keep him from leaving.

He eventually dropped out of the program after three weeks.

The basketball player managed to stay clean through the Clippers’ season but recently slipped back into his old habits around the same time he allegedly cheated on the reality star with other women.

One of his alleged flings, California attorney Polina Polonsky, told Star magazine that Odom “acted single” when they hooked up in June.

“I was under the impression that he had left Khloé and that’s why he was living at the Roosevelt,” she told the magazine. “He acted completely available and we definitely had mutual attraction.”

Polonsky said she met Odom on June 2 and had sex with him for the first time on June 13.

“After we had sex, Lamar stayed the night with me,” Polonsky added. “The next day we went back to the Roosevelt. I stayed there with him for the next couple of nights.”

Sources told TMZ that Kardashian believes he cheated but that she’s more concerned with getting him help for his drug abuse right now. The family allegedly staged an intervention earlier this week to convince Odom to return to rehab. He refused — and Kardashian kicked him out of the house.

Is that the final straw? Time will tell.

“Khloé is more concerned about saving Lamar than ending her marriage,” the source told the website.

Tell us: Should Khloé Kardashian keep trying to help Lamar Odom, or should she get out of the relationship now?