Dr. Gregory House, M.D., may have “retired,” but Hugh Laurie’s not slowing down. His sophomore album, Didn’t It Rain, just debuted at the top of the Billboard jazz chart. 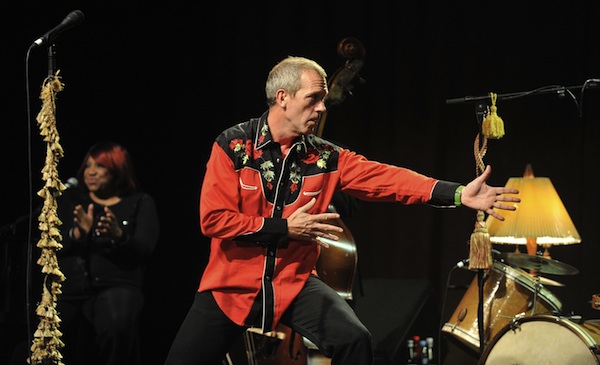 We know Hugh Laurie as the actor who played the cantankerous Dr. House on the long-running series House, but it seems that along with his passion for acting, Hugh has always had another love waiting in the wings: his love of Southern jazz and blues.

How did House end, anyway >>

And now that Laurie has a bit of free time on his hands, he has been able to concentrate on that second love. Just this month, he released a follow-up to his No. 1 jazz debut album, 2011’s Let Them Talk.

His new album — titled Didn’t It Rain — brings Laurie, as he explains it, “deeper into the forest of American music that has enchanted me since I was a small boy.”

A small boy, by the way, who grew up in Oxford, England.

Actors who sing, singers who act >>

In an interview with Fuse, Laurie explains that great standard songs are “undiscovered treasures,” and he compares these classic songs to grains of sand.

When discussing why he covers originals rather than writing new songs, Laurie explains, “Why would you try to make more grains of sand? Sand is not the problem. Making a sandcastle is a problem. Right now, I feel there’s enough of that to keep me going.”

Laurie goes on to impart that singing and acting are actually very different.

“In my own experience, acting is partly about putting on a mask,” he says. “Music is about taking a mask off. Playing music is much more intimate, you’re revealing a lot more of yourself. To actually open your mouth and sing or play an instrument, it’s a very vulnerable thing — vulnerable in a good way.”

In a very good way, Hugh.

Didn’t It Rain is available now. Hugh Laurie and his Copper Bottom Band will soon be embarking on a North American tour. We have the tour dates below.