We are about to discover the identity of the Brain Surgeon (in case we don’t already have a pretty clear guess). But Dexter may surprise us with an unexpected twist. 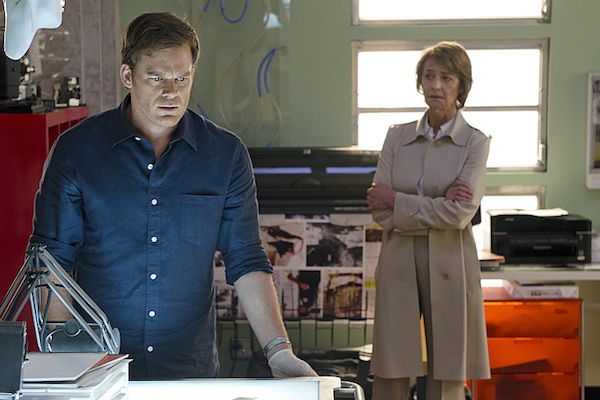 With only four episodes left in the series, Dexter is gearing up for some major revelations.

Warning, there are spoilers ahead. Proceed at your own discretion.

Here’s our theory: Dexter’s dad didn’t actually commit suicide. Harry didn’t like the direction Evelyn wanted to take the code and she killed him because of it. It doesn’t make sense that Harry would decide to take his own life. In all the other flashbacks we’ve seen, he was so supportive of Dexter (Michael C. Hall) and the code. We just can’t imagine him committing suicide after all that.

Others speculate that Oliver Saxon, Cassie’s boyfriend, is the real killer. He’ll become a suspect in the upcoming episodes. There’s speculation he could be Evelyn’s long-lost son and harbor a killing gene of his own. Maybe mommy and son have secretly been working together this whole time?

The identity of the Brain Surgeon will be revealed, yes, but the killer will continue to remain one step ahead of Dexter. In fact, there are rumors that Zach won’t be the only person in Dexter’s life who won’t make it through the next four episode. We agree with TV Guide on this one. We’re actually a bit worried about Hannah. She’s growing on us, and now that she and Dexter are contemplating a life together, she’s at risk.

Executive producer Sara Colleton told TVLine in an interview that they’ve been discussing the ending for years, and she’s confident that the ending is right for the show. Still, she recognizes it won’t please everyone.

“There will be people who hate it,” she said, “but we can’t try to anticipate that or put it through the lens of any other show’s finale — because that was another show. This is our show. This is Dexter.“