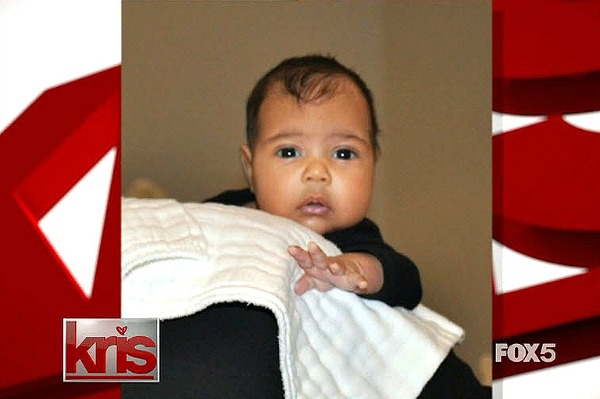 Kim Kardashian’s baby has finally made her world debut, and as many predicted, it happened on her grandma’s TV show.

Kanye West appeared on the season finale of the Kris Jenner Show Friday to talk about life, love and happiness — and finally showed a picture of baby North publicly.

“To stop all the noise, I thought it’d be really cool, on her grandmother’s season finale, to bring a picture of North,” Kanye said, clarifying that the couple “have not attempted to get paid” for images.

Kanye also gushed about his love for his baby mama Kim, saying, “I could have people saying, ‘This is going to damage your credibility as an artist or as a designer,’ and I say, I don’t care. I love this woman. Or someone could say you know, ‘When the paparazzi surround you, how could you… everyone knows you don’t like paparazzi, but why would you, why would you be with this person?'”

“And I’m saying, I’m being with this person because, you know, I love this person,” he explained. “And she’s worth it to me. She’s my joy. And she brought my new joy into the world.”

“After I lost my mother there was times I felt like I would put my life at risk. I felt like sometimes I didn’t have something to live for, and now I have two really special people to live for,” Kanye said, “A whole family to live for. A whole world to live for.”

Tell us: Was the first photo of baby North worth the wait?