Lily Collins is rapidly rising in fame and is proving to Hollywood that she is an actress that deserves recognition, without the help of her famous father and his contacts. 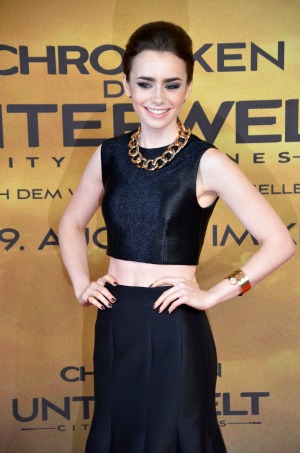 Lily Collins has revealed that she wants to make her acting career on her own, without the help of her famous father, Genesis singer Phil Collins.

It is admirable that the 24-year-old actress wants to break into Hollywood on her own and score roles based on her talent rather than relying on her father’s contacts to forge her career for her.

Collins recently told the Daily Mirror newspaper, “His being in the entertainment business is great in that we can really relate to each other. But at the same time, I wanted to enter into it in my own way and on my own path.”

“I love, respect and admire what he has done, but at the same time tried to do it on my own.”

It seems that Collins’ acting career has had a rapid rise to fame, as she has recently landed the role in the supernatural thriller, The Mortal Instruments: City of Bones.

However, this is not the British beauty’s first time on screen and she has grown up around famous people, with her career beginning in 2009 with a guest slot on 90210 and a role in The Blind Side.

Collins explained: “I may have grown up with certain people that were talented and that my family knew. I didn’t really regard them in any other way than family friends.”

The young star also explained about why she waited to start her acting career, saying, “I do feel very lucky in how quickly it happened. I did a show when I was two, but I didn’t start acting as a child. I wanted to go to school every day, be with my friends and really have that experience.”

“I purposely waited to start auditioning and acting until I was ready. I’ve also been very careful about keeping my private life private and trying to do this the right way, for me. Everyone has their own process.”