In this episode of Burn Notice, called “Tipping Point,” Michael nears the end of his mission but the appearance of one person may prove to be the proverbial straw that breaks the camel’s back. 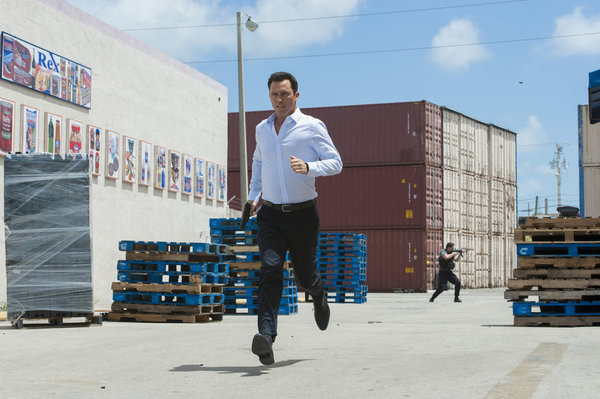 I’m not really much of a drinker (just ask my friends, I’m a major lightweight), but I think after this episode, I might need to pour myself a stiff drink.

The episode started out somewhat innocently enough. Michael (Jeffrey Donovan) and Sonya (Alona Tal) prepared for yet another mission and as soon as there was a hint of where they were going, Strong (Jack Coleman) decided to send in a team to capture James (John Pyper-Ferguson). Knowing that there are still two episodes to go, I really didn’t think it would happen that easily and I was right. The extraction process was a complete snafu and soon Michael was split up from Sonya and James. Sam (Bruce Campbell) and Jesse (Coby Bell) were on Strong’s main team, but as soon as they had more than one group to follow, Strong put his second team on Michael’s car — not knowing which vehicle had James in it.

Meanwhile, Fi (Gabrielle Anwar) was guarding Maddie (Sharon Gless) and Charlie because Michael begged her to keep them safe. He knew full well that no matter how good Strong said his men were, there was still a chance that James would get wind that Michael had betrayed him and would go after his family. So while the tension played out in Mexico with Sam and Jesse trailing Michael’s every move, Fi had tension of her own trying to figure out what James’ men were going to do every second.

Strong’s second team caught up with Michael and that was when it was revealed just who was leading it — Simon (Garret Dillahunt). The same Simon who was a maniac and that Michael put away a couple of years ago. It turned out that the CIA pretty much plucked him out of prison as soon as Michael put him in and he’s been off doing their dirty business for years. Their confrontation was the first scene that nearly had me hyperventilating. By watching Simon go about his crazy act and hurting anyone who got in his way without a second thought, Michael was finally pushed over the edge and decided he couldn’t take it anymore.

In an act that I am still trying to really wrap my head around, Michael killed Simon and then got James and Sonya away before they could be captured. When he killed Simon, it almost felt like Michael was actually attacking that part of himself that had done all those bad things to get this far into the mission. Michael saw what he’d been willing to do and he didn’t like it. It was as if by looking at Simon, Michael was actually looking in a mirror at a distorted version of himself. Michael also didn’t like the people who had forced him to go that far.

But Michael had done his job almost too well and it was Sonya who nearly paid for that when James concluded that it must have been her who leaked their mission. In a twist I didn’t see coming at all, Michael admitted that it was him and also admitted that he may not have believed in everything that James did, but he admired the fact that the man believed in something.

James decided not to kill Michael and in the end, I was left reeling by the implications of both of their acts. In my review of last week’s episode, I wondered if we would ever get Michael back from his dark path. It is hard to believe, but Michael has gone even farther down that path now and there’s no telling if he actually will come back or what shape he will be in when he does.

Michael turning his interrogation of Sonya into innocent questions and managing to get one piece of information from her.

Michael sleeping with Sonya to copy the data on her phone.

Michael rolling his eyes when Strong called him a lady killer.

“Your bill has come due. You want your old life back, you’re gonna have to trust me.”

Sam reassuring Michael that he and Jesse would be there to watch his back.

Gasping out loud, literally out loud, when Simon appeared.

“Guys like us, we’re useful. As long as we’re useful, someone’s going to want to take us out to play.”

Simon asking Strong for one second for Michael to decide if he was going to shoot him or not. 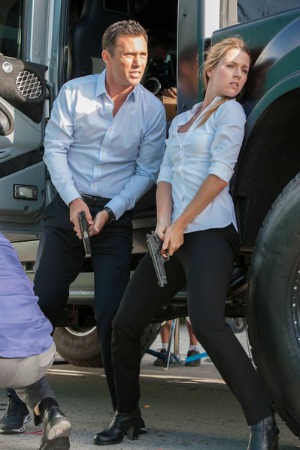 “Stay strong? Did you get that off a bumper sticker?”

Michael ordering Simon not to touch the man on the ground again.

Knowing it was wrong, but still laughing when Simon couldn’t remember the name of one of his men.

Sam looking ready to take Strong down for comparing Michael to Simon.

Gasping out loud again when Michael went after Simon’s eyes.

Michael stabbing Simon. I don’t even… I can’t… There are no words.

Maddie doing a great job at pulling off her nervousness as nicotine withdrawal.

Michael finally admitting who he was.

Michael tipping his head back and waiting for Sonya to kill him.

What did you think when Michael killed Simon and told everything to James?