The wedding is off! Kelly Clarkson and her fiancé have decided to keep their wedding day simple without all of the fanfare. 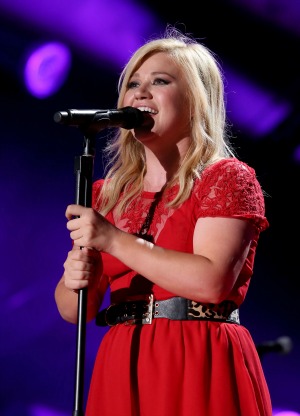 Well, that was much ado about nothing. After months of talking up her October wedding to entertainment manager Brandon Blackstock, Kelly Clarkson has decided to elope.

The Season 1 American Idol winner admitted to People magazine that the entire ordeal just became too much for the couple to handle.

She told the entertainment magazine, “We are so busy that we finally just came to terms the other night and were like, ‘So, we change our minds and we want to elope.’ We just got so overwhelmed by it — all the decisions.”

The duo were far enough along in the wedding planning process that they had clued in their friends and family about the date.

Clarkson shared, “We sent out a save-the-date to everyone and then it got crazy and all the details were leaking.”

What it finally came down to though was their busy schedules. There just wasn’t enough time to dedicate to planning out all of the details. Their fall calendar sounded downright exhausting.

The singer said, “Then honestly the planning — I have a Christmas record coming out… We have two kids who just started school. We’re going to all these football games and soccer games and volleyball games and [Brandon]’s got one of the biggest artists [Blake Shelton] in country music. He’s flying everywhere.”

Family and friends will be treated to a low-key party after their private nuptials, which will include Clarkson, Blackstock, his two kids from his first marriage and the minister.

She did share an engagement photo with her Twitter followers on Tuesday which features a tender moment between the husband and wife-to-be.

It looks like things are unfolding exactly the way Clarkson wants.

She said, “Our whole life is a celebration.”