Singer Toni Braxton suffers a wardrobe malfunction and accidentally flashes her booty during a concert. 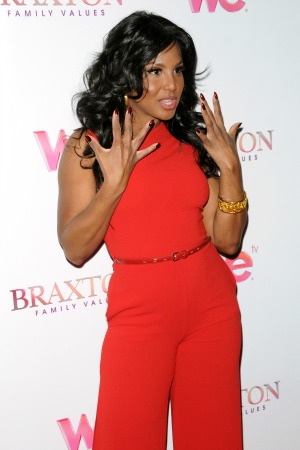 When you’re performing on stage in front of all those hot lights, it can be nice to have a nice breeze every once in a while. But when singer Toni Braxton felt such a breeze during a concert, it meant that her dress was coming apart and that she had just inadvertently mooned her audience.

During a concert this week, Braxton was shakin’ her groove thang when the back of her costume started falling apart. TMZ has the video where you can see that, in moments, the entire back of the dress was hanging off — exposing her booty to the world.

Braxton has taken the accidental striptease in stride though, and spoke to omg! Insider about what happened. She said that she didn’t realize what happened at first. How long did it take for her to realize that something had gone wrong?

“It [took] a few minutes,” Braxton said. “I was dancing doing the one-two and I kind of thought, ‘Are my [breasts] exposed? I am feeling air.’ I remember that distinctly, so that’s why I held the top of the dress but then I realized the whole dress was coming apart. The whole dress just fell apart on stage!”

Luckily, Braxton wasn’t completely nude underneath the dress, but almost. “I had a bodysuit on but it was very skimpy,” she revealed. “Little tricks of the trade. I was uncomfortable. I can’t deny I was uncomfortable, but I made it work and the audience kind of laughed and it turned into a burlesque show. I should have charged more for the tickets. Who knew?”

When she realized what was happening, Braxton almost ran off stage, but then decided to go on with the show. “You know, you have to make every moment work. You make it a part of the show and I just thought how lucky I was that the whole thing didn’t come apart! We laughed about it and we made it work, but that’s all you can do. Breathe through it all.”

Braxton has certainly proven she’s got a great sense of humor about what happened. Perhaps she’s learned to take the little things not so seriously, thanks to dealing with bigger issues like living with lupus, her recent bankruptcy troubles and raising a son with autism. After all that, a little booty flashing must seem like nothing at all.

Celebrities with children with autism: Toni Braxton
Inside Toni Braxton’s “I Heart You” video shoot!
Toni Braxton unbreaking her heart with Eddie Murphy